After Bigg Boss 14, Colors channel is prepping up for their popular stunt-based reality show Khatron Ke Khiladi. The Rohit Shetty hosted show is said to return soon to entertain fans. Now, rumour has it that Sharad Malhotra and Erica Fernandes has been approached for the show. Read on. 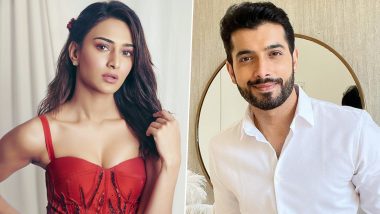 After Bigg Boss 14, Colors channel is prepping up for their popular stunt-based reality show Khatron Ke Khiladi. The Rohit Shetty hosted show is said to return soon to entertain fans. Recently, a few reports also hinted that the host will start shooting for KKK 11 in the summers. Having said that, the makers are yet to zero down a location, considering COVID-19 is still very much in the air. With the show already in the pipeline, names of many celebs have popped up who are being approached for KKK. Khatron Ke Khiladi Reloaded: Here's What Jay Bhanushali Has To Say On Participating in Fear Factor Once Again.

As per a report in Telly Chakkar, Sharad Malhotra, who was last seen in Naagin 5 opposite Surbhi Chandna has been approached for the reality series. However, there has been no official confirmation on this, neither by the channel nor by the actor. But if this happens to be true, his fans will have fun watching him amid snakes and other creatures.

Apart from Sharad, the other name that is doing rounds is of Kasautii Zindagii Kay 2 actress Erica Fernandes who might be seen on KKK 11. As per Bollywood Bubble, she has been sent the offer, and she is looking into it.  Mumbai Police Honours Rohit Shetty For His Help Of COVID-19 Frontline Workers, Calls Him 'The Asli Dilwale' (View Tweet).

"Erica has always been looking for something which can challenge her. The actress is known for being adventurous and hence the makers of Khatron Ke Khiladi 11 have been keen on roping in Erica Fernandes for the upcoming season. Erica is contemplating the offer and yet to give an answer," told a source to BB.

Well, seems like the makers are willing to spend and get on board popular faces from the Telly word, for a fun-filled experience for the viewers. Having said that, rumour has it that Bigg Boss 14 winner Rubina Dilaik and Abhinav Shukla might also be part of KKK 11. Stay tuned!

(The above story first appeared on LatestLY on Mar 10, 2021 12:57 PM IST. For more news and updates on politics, world, sports, entertainment and lifestyle, log on to our website latestly.com).