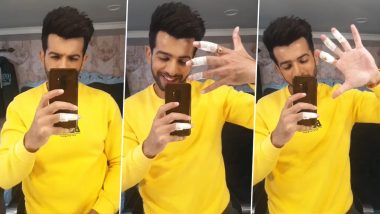 It's Deja Vu all over again for actor Jay Bhanushali, for he has once again hurt himself during a stunt in Khatron Ke Khiladi: Made In India. The actor, during a task injured three fingers on his left hand and two on the right one. In a video posted on Instagram, Jay revealed his injuries while mentioning that he was still raring to go and was all set for another task. He captioned his video, "Injured while shooting for #khatrokekhiladimadeinindia but all set for one more stunt #reels #reelitfeelit @colorstv WISH ME LUCK!!" Khatron Ke Khiladi Reloaded: Here's What Jay Bhanushali Has To Say On Participating in Fear Factor Once Again.

It can be recalled that Jay was very excited to be a part of KKK: Made In India and in fact, had also moved out of his home in Andheri to keep his three kids and wife Mahhi safe. "Apart from Tara, I also have Rajveer and Khushi at home. So, I can’t afford to take any chances," revealed Jay earlier. Khatron Ke Khiladi Reloaded: Jay Bhanushali Moves Out Of Home To Resume Shoot and Avoid Risking Family's Health (Deets Inside).

Injured while shooting for #khatrokekhiladimadeinindia but all set for one more stunt #reels #reelitfeelit @colorstv WISH ME LUCK!!

The self-confessed adventure junkie, Jay had to quit Khatron Ke Khiladi 7 after an injury he sustained one week before the finale. Jay fell from a helicopter during a task and that led to an injury that had forced him to give up the show. But going by Jay's caption, he seems to not be doing any quitting. Way to go Jay!

(The above story first appeared on LatestLY on Aug 06, 2020 04:50 PM IST. For more news and updates on politics, world, sports, entertainment and lifestyle, log on to our website latestly.com).