Krushna Abhishek Talks About Nepotism, Says ‘Yes, I Am Govinda’s Nephew But He Doesn’t Work In My Place’ 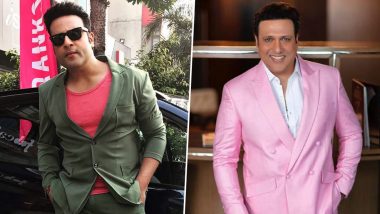 On June 14, 2020, Sushant Singh Rajput died by suicide and left fans and family in a state of shock. Since then, many Bollywood celebrities have come out in public and spoken in length about nepotism which has been part of the entertainment industry since quite a long time. Mahesh Bhatt, Karan Johar, Aditya Chopra and more were slammed online for allegedly being the ones promoting nepotism in the industry. Even, star kids faced the wrath on social media. Now, comedian Krushna Abhishek is the latest one who has addressed the debate and tagged has it baseless. Kareena Kapoor Khan Addresses the Ongoing Nepotism Debate, Says 'Same People Pointing Fingers Are Making Nepotistic Stars’.

Speaking to Hindustan Times, Krushna opened up on the ongoing nepotism debate and expressed even though Govinda might get him a project, it's later his talent which will count. “That’s because everyone has to struggle on their own. Yes, I am Govinda’s nephew but Govinda doesn’t work in place of me. Woh nahi aate mere liye kaam karne, mujhe khud kaam karna padta hai. Maybe Govinda will get me work but after that it’s all about talent . Nepotism has no role in it," he said.

“It doesn’t matter at all which film family you belong to. I’m from a film family; I should have been in (actor) Varun Dhawan’s position. But I’m struggling on my own. Varun Dhawan’s father is (filmmaker) David Dhawan, but he also probably thinks he should be in some other position. Everyone has their own journey and struggle," he added. Saif Ali Khan Says He’s Been a Victim of Nepotism Too, Twitterverse Gives ‘Sharmila Tagore’s Son’ a Reality Check (View Tweets).

Krushna also talked about Sushant Singh Rajput's untimely demise and said it was a personal loss for him. He said, "I cried so much when I got the news. He was my friend, we both were a part of dance reality show and I couldn’t bear the news. It is so sad because he was so bright." Stay tuned!

(The above story first appeared on LatestLY on Aug 11, 2020 09:36 AM IST. For more news and updates on politics, world, sports, entertainment and lifestyle, log on to our website latestly.com).