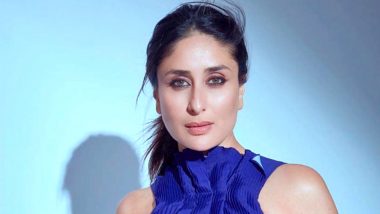 Sushant Singh Rajput's death on June 14 led to a storm on social media where the nepotism debate gained momentum. The 'insider' and 'outsider' chaos was all over the internet in which Bollywood bigwigs and their kids were the targets. After the same, many celebrities came forward and spoke their mind on the debate. And now, the latest one to talk about the same is none other than Kareena Kapoor Kapoor who in an interview with Barkha Dutt expressed how it's the audience who rule, and not an insider. The actress also tagged the whole nepotism debate as 'weird'. Saif Ali Khan Defends Karan Johar in the Recent Nepotism Debate, Says 'The Truth is Always Complicated'.

Kareena started off by saying how she can take names of celebrity kids who have not made it big even after being from a so-called Bollywood background. “21 years of working would not have happened with just nepotism. It is not possible. I can take a long list out of superstars’ children for whom it’s not been able to happen that way,” she said.

“It might sound weird but my struggle is there. There is a struggle but it probably is not as interesting as somebody who comes in a train with just Rs 10 in his pocket. Yeah, it’s not been that and I can’t be apologetic about it”, she added. Ranjeet Says Nepotism Was Always There, Recalls How Jaya Bachchan Replaced Parveen Babi in Silsila.

Ahead, quoting how audience is the end decider and makes or breaks an actor, she said, "The audience has made us, nobody else has made us. The same people pointing fingers, they are only making these nepotistic stars. Aap jaa re ho na film dekhne? Mat jao (You are going to watch the films, right? Don’t go). Nobody has forced you. So I don’t understand it. I find this whole discussion is completely weird." Saif Ali Khan Says He’s Been a Victim of Nepotism Too, Twitterverse Gives ‘Sharmila Tagore’s Son’ a Reality Check (View Tweets).

Bebo also gave examples of Shah Rukh Khan, Akshay Kumar and added how they've been successful in the industry even after no prior connections. “The idea is that today so many of our biggest stars whom you (the audience) have chosen, whether it is Akshay Kumar or Shah Rukh Khan or Ayushmann Khurrana or Rajkummar Rao, are all outsiders. They are successful actors because they have worked hard. Whether it is Alia Bhatt or Kareena Kapoor, we have also worked hard. You are enjoying our films and watching them. So, it’s the audience that makes or breaks us,” she concluded. Stay tuned!

(The above story first appeared on LatestLY on Aug 04, 2020 07:59 PM IST. For more news and updates on politics, world, sports, entertainment and lifestyle, log on to our website latestly.com).