We search for exciting content on the OTT platforms every week, so that audience can chill and binge-watch what they prefer and want. This week we have some big releases on OTT, let's quickly take a complete look at the series and movies releasing on the OTT platforms this week. 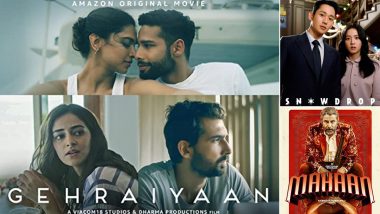 We are moving on the second week of February 2022 and this week we have some super interesting releases. With that, there are several promising series and movies releasing on OTT platforms like Disney+ Hotstar, Amazon Prime Video, Netflix, ZEE5 and more. Talking about the biggest release of the week it would be Gehraiyaan, which will drop on Amazon Prime Video on February 11. Helmed by Shakun Batra, the movie revolves around journey of two couple who get into deep modern relationships problem. The romantic drama stars Deepika Padukone, Siddhant Chaturvedi, Ananya Panday, Dhairya Karwa in the lead and Naseeruddin Shah, Rajat Kapoor in supporting roles. Gehraiyaan Trailer: 7 Moments From Deepika Padukone, Siddhant Chaturvedi, Ananya Panday and Dhairya Karwa’s Amazon Prime Video Movie That Are Intense and Heart Touching!

Another big release of the week would be Mahaan, which is all set to release on Amazon Prime Video on February 10. Directed by Karthik Subbaraj, the film will unveil the story about a father and son and how their life goes through an unexpected series of events with an action-packed journey. The movie stars Chiyaan Vikram, his son Dhruv Vikram, Bobby Simha, Simran and Vani Bhojan, among others. Another interesting release of the week would be Snowdrop, which will stream on Disney+ Hotstar from February 9. The Korean series sees Jung Hae-in, Jisoo, Yoo In-na, Jang Seung-jo, Yoon Se-ah, Kim Hye-yoon, and Jung Yoo-jin. Mahaan: Dhruv Vikram Shares a Cool Squad Pic With Father Chiyaan Vikram, Co-Star Bobby Simha and Director Karthik Subbaraj.

(The above story first appeared on LatestLY on Feb 07, 2022 03:23 PM IST. For more news and updates on politics, world, sports, entertainment and lifestyle, log on to our website latestly.com).