R Madhavan is trying hard to shed his chocolate image with every film by either being fierce Vikram or by being Saala Khadoos. But that captain from Sea Hawks will always be how we will remember him. So on his birthday today, let's take a trip down memory lane to when R Madhavan graced our television sets 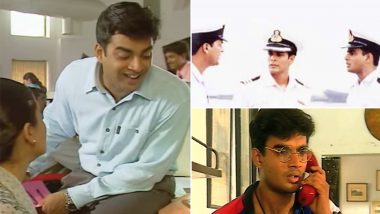 R Madhavan celebrates his birthday today. The actor has done some incredible movies down South and in Hindi cinema that we will forever cherish. Many of his movies have been remade as well. He is a multi-talented human who has been part of the Royal Force as well. But you know what? Whenever we see Madhavan, our thoughts and memories take us back to the 90s when we used to feast our eyes looking at his twinkling eyes and the sparkling smile on our Television sets. We can never thank Doordarshan enough for introducing us to this handsome man and an amazing actor. R Madhavan Wants to Spend His Birthday With Closed Ones, Says ‘I Cannot Imagine Celebrating Anything Right Now’

So on his birthday today, we thought of reminding to the Golden period of Indian Television when R Madhavan was part of some of the best shows in TV history

A show that aired on SonyTV in the 90s, Saaya was about two girls who were poles apart. But they were best of friends. R Madhavan played Shekhar, a good and sweet-natured guy you can fall in love with instantly. You can watch Saaya on YouTube

Banegi Apni Baat was an extremely heady mix of love, relationships, college, family and life in general. Madhavan played Ashley who falls for the female lead. This is one of those bold shows that didn't shy away from having kissing scenes and we are talking about the 90s in Indian Television. Banegi Apni Baat is streaming on ZEE5

Nobody who has ever been a fan of Doordarshan can forget Sea-Hawks which aired in its sister channel DD Metro. The young, dashing captain of the ship, Preet was everyone's favourite from the show.  R Madhavan Shares Good News of Him and His Family Testing Negative For COVID-19, Says ‘All Fit and Fine Now’

A hilarious ZEE TV show from the 90s that can still make anyone crack up. Ghar Jamai was one of the best comedy shows of that time which had Madhavan playing Satish Shah's son-in-law. You can watch it on ZEE5

We don't know how many of you remember this but Raj Kahani was a Sunday special show which was based on Prince And Pauper trope. Madhavan played a double role of a prince and the pauper who swap places.

Madhavan played a convict in this series which was a moving tale. Unfortunately, not much is known about this show and it's doubtful where you can even watch it.

Yule Love Story had a different tale every episode in one of them R Madhavan was featured. He played a crook. You can check out the show on YouTube.

(The above story first appeared on LatestLY on Jun 01, 2021 08:10 AM IST. For more news and updates on politics, world, sports, entertainment and lifestyle, log on to our website latestly.com).