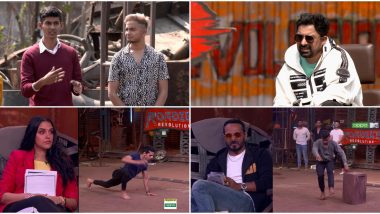 With auditions for Roadies Revolution coming to an end in Kolkata, this week, the audience will get a sneak peek into the culling round. The shortlisted contestants from the auditions phase will now gear up to make their way to the top and secure their position for the much-awaited journey. The celebrity leaders will meet a good pool of talent with noticeable struggles, with the heart-popping amazement, thrill and fun for the culling round. Roadies Revolution 17 Kolkata Auditions Leave Gang Leaders With Mixed Emotions (Watch Video).

Jayant impressed everyone with his fitness, flexibility and rhythmic stunts. A victim of racism, Jayant narrated to the gang leaders his struggles of how he was looked down upon because of his colour and that he was not very fluent in English. He further elaborated on how he has seen domestic violence at home when he was young but has now brought in change in the family. Roadies Revolution 17 To Air Fresh Episodes of The Adventure Reality Show From June 27 (Deets Inside).

Another contestant, Aman, won everyone’s hearts with his idea of giving back to society in small ways. He will be seen entertaining through his unique ‘Animal Flow’ and callisthenics. The celebrity leaders too had their share of entertainment after successful completion of the auditions. We’re sure you wouldn’t want to miss out on this one! Roadies Revolution Season 17: Rannvijay Singha Pledges To Contribute Funds To Contestant Avdesh Nagar To Help Achieve Olympic Dream.

From the auditions, the episode moves on to the first culling round of this season. Rannvijay introduces the culling round and starts judging everyone in groups of four or five. While for some it will be a happy ending, others will return with the hope of coming back with a bang next time. Moreover, some contestants will have to deal with the suspense of the holding area. The surprises don’t end here, as one of the contestants will also get a direct entry to the Roadies Journey. Rannvijay also has something planned for another aspirant for the first time ever on the show! Too much excitement already?

(The above story first appeared on LatestLY on Jul 09, 2020 03:03 PM IST. For more news and updates on politics, world, sports, entertainment and lifestyle, log on to our website latestly.com).