Devoleena Bhattacharjee, who had replaced Gia Manek as Gopi Bahu presents the new season in the recently released teaser. She captioned the teaser as, "We are back by popular demand." And"Kaun Hain Yeh Log", ask netizens who have begun trending the hashtag, #SaathNibhanaSaathiya2, with funny memes and hilarious jokes. 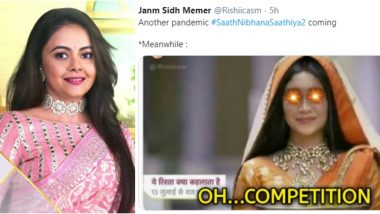 Nobody: Absolutely No One: Not a single soul on this Earth: Saath Nibhaana Saathiya: WE ARE BACK! Star Plus's popular show, one of television's longest-running series, Saath Nibhaana Saathiya is back with the new season, which TBH no one was asking for. Devoleena Bhattacharjee, who had replaced Gia Manek as Gopi Bahu presents the new season in the recently released teaser. She captioned the teaser as, "We are back by popular demand." And"Kaun Hain Yeh Log", ask netizens who have begun trending the hashtag, #SaathNibhanaSaathiya2, with funny memes and hilarious jokes. They are 'blaming' Yashraj Mukhate's viral rap "Rasode Me Kon Tha" and 2020 for Saath Nibhaana Saathiya Season 2!

Last night Bigg Boss fame, Devoleena Bhattacharjee, posted Saath Nibhaana Saathiya 2 teaser on Instagram and it has taken the internet by storm. Interestingly, she welcomes viewers in most Tulsi and Parvati rolled into one fashion wearing a gorgeous lilac saree and aarti ki thali in hand. And then we hear cooker ki seeti from their rasoda. Now, if you are wondering about the significance of seeti and rasoda, I'm sorry, the forthcoming Saath Nibhaana Saathiya 2 funny memes is not for you guys. JK.

But on a serious note, makers did launch the new season of the show that initially aired from 2010 to 2017. And one person who Twitterati is 'crediting' for this return is none other than Yashraj Mukhate, an YouTuber and Instagrammer who shot to fame with his Kokilaben's Rasode Me Kon Tha viral video. His rap brought everyone featuring in the clip, Rupal Patel (Kokilaben), Rucha Hasabnis (Rashi) and Gia Manek (Gopi Bahu) and most importantly the show, Saath Nibhaana Saathiya into the limelight. And now, the show-makers are encashing the popularity and craze. However, netizens are reacting to this news in their good old way – making funny memes and jokes on it. Here's some of the most hilarious reactions on this trend.

Who is excited, no one, 2020 is worst year, and you add anather problem. pic.twitter.com/lT2rWHBKje

#SaathNibhanaSaathiya2 is coming soon on star plus

Saath Nibhaana Saathiya is not the only serial coming back with a new season. Saas Bina Sasural is also rumoured to return with a second season. In the original run, Aishwarya Sakhuja and Ravi Dubey played the lead pair. Sony TV has tasted success with second instalments of shows such as Ladies Special and Ek Duje Ke Vaaste. While loyal fans would welcome the news of their favourite shows returning, but not everyone is as excited as them!

(The above story first appeared on LatestLY on Sep 01, 2020 03:29 PM IST. For more news and updates on politics, world, sports, entertainment and lifestyle, log on to our website latestly.com).