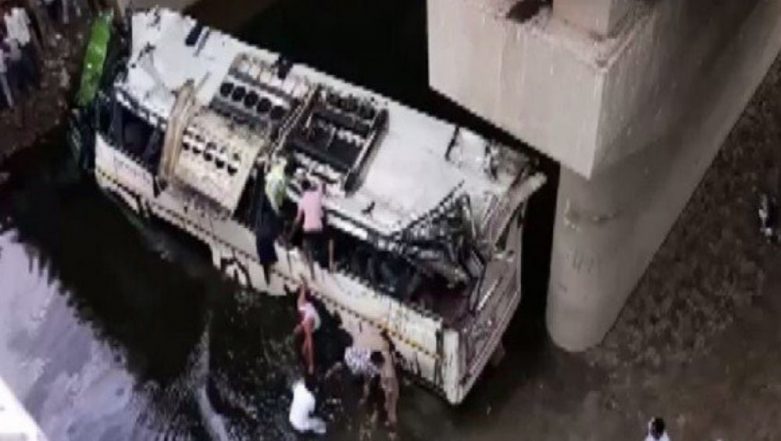 Agra, July 8: In a horrific accident on Monday morning, a speeding Janrath bus fell from the Yamuna Expressway Nala in Agra. According to reports, 29 people are reported to be dead till now and 17 people are injured. When the accident took place, 44 people were reported to be on board the bus that fell into the drain. Haryana Roadways Bus Accident Kills Three, Injures Several Others Near Jajanwala Village in Jind District.

Rescue operations were in process and as per reports, the number of casualties is expected to increase. The reason behind the accident has not been found yet. The bus was reportedly going from Lucknow to Ghaziabad.

UP CM Yogi Adityanath has taken cognizance of the accident of Awadh Depot Bus of UP Roadways in Agra on the Yamuna Expressway. He has expressed his grief and condolences at the death of the passengers and directed DM SSP to provide all possible medical attention to the injured. pic.twitter.com/dqjsxGxam4

Uttar Pradesh Roadways has announced an ex-gratia of Rs 5 lakh to the family of the deceased. UP CM Yogi Adiyanath has expressed his grief and condolences at the death of the passengers and directed DM SSP to provide all possible medical attention to the injured.

Defence Minister Rajnath Singh has also taken cognizance of the road accident. He spoke to the District Magistrate and gave directions for proper treatment of those injured.