The bizarre statement was made to motivate students who scored less percentage, but its now drawing a lot of flak from the opposition parties. 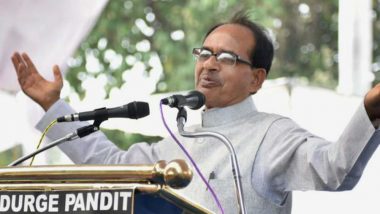 Bhopal, June 9: Madhya Pradesh Chief Minister Shivraj Singh Chouhan has remarked that Bollywood superstar Amitabh Bachchan is not well qualified still has achieved success, while motiving school students on Friday through his speech. According to news reports, Chouhan while addressing the students made the bizarre statement to motivate those students who scored less percentage. CM said that superstar Amitabh Bachchan is among those icons who have low educational degrees yet achieved extraordinary success. The statement is now drawing a lot of flak from the opposition parties.

The Opposition Leader of the state Ajay Singh slammed Chouhan over the slip off the tongue. He replied over the statement: “It is an insult to Bhopal’s son-in-law(Amitabh Bachchan). I don’t understand why the CM is giving such statements. Chouhan was in kindergarten when Amitabh Bachchan was working as a professional.”

Reportedly Chouhan was trying to inspire students of Class XII who scored less than 70%. He said during the speech, "You all must have heard of Bollywood superstar Amitabh Bachchan, the one who hosts Kaun Banega Crorepati. He did not have any good formal education degrees. He was once rejected by Akashvani due to his voice, but today he is famous because of his voice."

Urging students not to lose hope, he further added, “If you keep your spirit high, like these icons, and make them your inspiration, you will never need to get good marks."

However, calling Big B a low scorer has given fodder to opposition party ahead of 2019 elections. The statement has created an uproar seeking an apology over the same.

(The above story first appeared on LatestLY on Jun 09, 2018 04:58 PM IST. For more news and updates on politics, world, sports, entertainment and lifestyle, log on to our website latestly.com).