Education Secretary Anil Swarup said yesterday that a preliminary enquiry had revealed that the leak for the Class 10 Mathematics paper was restricted to Delhi and Haryana. 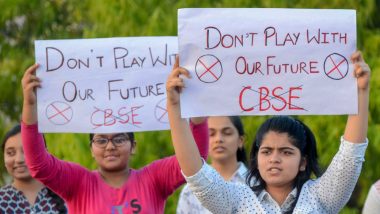 New Delhi, March 31: A group of students today staged a demonstration near the Central Board of Secondary Education (CBSE) office at Preet Vihar here against the leak of Class 10 Mathematics and Class 12 Economics papers."The students tried to block the road in front of the CBSE office, but we kept them away. A group of about 25-30 students are protesting outside the CBSE office," said a senior Delhi Police officer.

Two cases have been registered in the paper leak incident so far. The Crime Branch of Delhi Police has questioned nearly 60 people, including students and tutors, in this connection. Raising slogans against the board, agitating students says that they are suffering due to CBSE's mistake.