DocuBay: Streaming Platform for Documentaries Set to Launch in India This Summer

The platform will make discovery easy through affinity-based categories like Nature, Action, Travel, Culture, and Science. 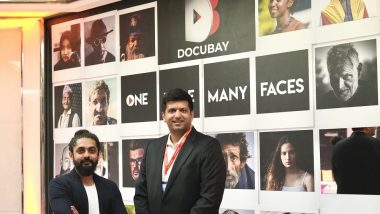 Mumbai, April 8: DocuBay, a new, global, subscription-based streaming service and video-on-demand platform featuring international documentaries, will launch this summer and will include India in its first phase. DocuBay will be available in India with a distinctive global catalogue for Indian audiences, and several titles exclusive to the country.

IN10 Media showcased a first look of DocuBay at the MIPDoc event in Cannes to a select international community of documentary creators and distributors, said a statement. At the event, DocuBay also presented The Pitch, a documentary pitching session. The judges for the pitches included Chris Hoelzl from Smithsonian Channel, Axel Arno from SVT, Bernadette McDaid from National Geographic and Akul Tripathi, COO, DocuBay. Documentary on Nick Jonas, Kevin Jonas and Joe Jonas Underway for Amazon Prime Video.

"Humankind, as a race, has always had the uncontrollable desire to tell their tale. To save it for posterity. Etched in stone, sketched on rock, sung through the ages, engraved, embossed, stitched, typed, recorded, photographed and now filmed - documentaries are just the latest in a long series of the preferred repository of human experience. These cumulative/many experiences unite us as One tribe, which is at the core of DocuBay philosophy," said Tripathi.

The platform will make discovery easy through affinity-based categories like Nature, Action, Travel, Culture, and Science. It intends to further refine its 'bays' by analysing watch habits and consumer surveys of the early adopters.

Aditya Pittie, Managing Director, IN10 Media, said: "With consumers worldwide having more content choices than ever, DocuBay's constantly expanding library of international documentary films will create its own niche through its focus on discovery and distribution."

(The above story first appeared on LatestLY on Apr 08, 2019 06:06 PM IST. For more news and updates on politics, world, sports, entertainment and lifestyle, log on to our website latestly.com).