As per the IMD, heatwave conditions are likely over north Madhya Maharashtra on May 5, Vidarbha from May 5 to 8, over West Rajasthan, Madhya Pradesh from May 6 to 8, and over southwest Uttar Pradesh, East Rajasthan on May 7 to 8. 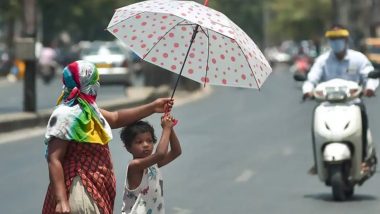 Mumbai, May 5: Long-awaited rainfall brought with it a respite from the intense heatwave in northwest India. On Wednesday, parts of Delhi-NCR witnessed thunderstorms, rainfall, and strong winds due to Western Disturbance. However, according to the India Meteorological Department (IMD), a fresh heatwave spell is likely to tighten its grip over central India from May 5 and will spread over northwest India from May 6.

As per the IMD, heatwave conditions are likely over north Madhya Maharashtra on May 5, Vidarbha from May 5 to 8, over West Rajasthan, Madhya Pradesh from May 6 to 8, and over southwest Uttar Pradesh, East Rajasthan on May 7 to 8. Weather Update: Heatwave Claims 25 Lives in Maharashtra, Mahabaleshwar Hill-Station Bakes at 31 Degrees.

♦ Heat Wave conditions in isolated pockets over north Madhya Maharashtra on 04th & 05th over Vidarbha during 05th-08th; over West Rajasthan, MP during 06th-08th May and over southwest UP & East Rajasthan on 07th & 08th May. pic.twitter.com/CrQrIyQeL6

IMD, in its daily weather bulletin, said that under the influence of an east-west trough from Punjab to Manipur in lower tropospheric levels, scattered light/moderate rainfall with thunderstorm/gusty winds with speed reaching  40-50 kmph is very likely over Northeast India from the next 5 days. Similarly, scattered/fairly widespread light/moderate rainfall with thunderstorm/gusty winds is very likely over Bihar, Jharkhand, West Bengal-Sikkim, and Odisha from the next 3-4 days.

Under the western disturbance, Western Himalayan Region to witness an isolated/Scattered rainfall during the next 2 days. While East Uttar Pradesh to experience isolated light rainfall with thunderstorm/gusty winds with speed reaching 30-40 kmph during the next 5 days. Apart from this, strong surface winds are predicted over West Rajasthan and northeast Uttar Pradesh from May 6 to 8.

According to IMD, a cyclonic circulation is lying over South Andaman Sea and neighbourhood. Under its influence, a Low-Pressure Area is likely to form over the same region around May 6. It is very likely to move northwestwards and intensify gradually into a Depression during the subsequent 48 hours. Under its influence, heavy rainfall is expected at isolated places over Andaman and Nicobar Islands on May 5 and 8 and isolated heavy to very heavy rainfall over the Andaman Islands on May 6 and 7. Fishermen are advised not to venture into the Andaman sea area and Southeast Bay of Bengal.

(The above story first appeared on LatestLY on May 05, 2022 10:46 AM IST. For more news and updates on politics, world, sports, entertainment and lifestyle, log on to our website latestly.com).