Moradabad Girl, Alleged to Have Been Held Hostage, Says She is Married to 'Abductor'

A girl from Moradabad who has been alleged to be kidnapped by Muslim youth and five others, recently took to her social media handle to declare that she has been married to the ‘abductor’ of her own wish. 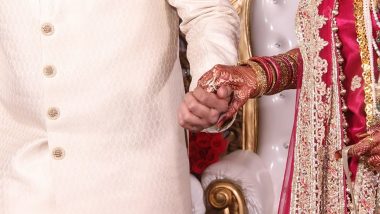 Moradabad, August 2: In a surprising turn of events, a girl who was alleged to have been 'kidnapped' by Muslim youth and five others, took to social media to refute the charges and declared she has been married to the youth "of her own free will".

In a video clip that was released on social media, the girl can be seen standing beside Salman -- the main accused in the case -- accepting that she has been in a "relationship" with the youth for quite some time and they were married. She said no one has forced her to change her religion.

The Moradabad Police, who booked Salman and five of his family members hours before the video went viral, said that they have taken cognizance of the video clip and a fresh probe has been ordered.

The girl's father, meanwhile, alleged that the video was fake and that his daughter was forced by the accused and his accomplices to record the statement.

"Salman had bad intentions. He and his brothers and relatives had misbehaved with me and my family several times. They used to threaten us. The video clip is fake, and my daughter has been forced to say such things," the girl's father told reporters.

Superintendent of police (SP) of Moradabad, Amit Kumar Anand, said, "The case was already under investigation. Teams were deployed to search the girl, after her family alleged that she was kidnapped by their neighbours.

"However, a video clip has come to the fore. In it, the girl has confirmed leaving her house willingly and getting married to Salman, who is the main accused in the case. The girl has also denied the allegation of religious conversion levelled by her family."

The SP city said that the police have taken note of the video and a fresh probe has been ordered into the matter.

(The above story first appeared on LatestLY on Aug 02, 2021 12:10 PM IST. For more news and updates on politics, world, sports, entertainment and lifestyle, log on to our website latestly.com).