Andhra Pradesh: 7 Dead, 30 Rescued After Fire Breaks Out at Hotel in Vijayawada Which Was Being Used As COVID-19 Facility 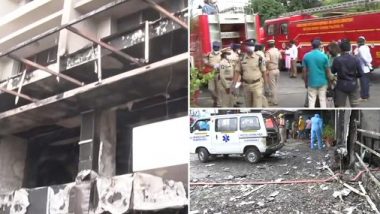 Vijayawada, August 9: A massive fire was reported in Andhra Pradesh on Sunday in which at least seven people have been killed so far while as many as 30 people have been rescued. According to a tweet by ANI, the blaze broke out at a hotel in Vijayawada. As soon as the blaze was reported, fire tenders were pressed into service at the spot. Reports inform that the hotel was being used as a COVID-19 facility by a hospital. The fire occurred in the hotel which was taken on lease and being run by a private hospital to treat COVID-19 patients.

Krishna DC Mohammad Imtiaz informed that the incident took place around 5 am. "Around 22 patients are being treated in hospital. We are evacuating the entire building. The reason of fire appears to be a short circuit, as per the preliminary report, but we will have to ascertain", the official said. Reports inform that around 30 COVID-19 patients were present inside the building when the fire broke out. Gujarat: Fire Breaks Out at Chemical Factory in Vapi, Thick Black Smoke Seen; Watch Video.

Andhra Pradesh Chief Minister Jagan Mohan Reddy expressed shock and grief over the fire mishap and enquired about the cause of the accident. The CM's Office said that he directed the concerned officials to take up the rescue measures and admit the injured in nearby hospitals.

#UPDATE - Seven people have lost their lives and 30 have been rescued: Vijaywada Police https://t.co/9hs9dow2mV

Andhra Pradesh CM YS Jagan Mohan Reddy is closely monitoring the situation in Vijayawada. Several reports inform that the hotel staff were alerted immediately and it is said that the fire reportedly broke out due to a short circuit. According to reports, Vijayawada CP Srinivasulu said that the death toll is likely to increase.

Andhra Pradesh continued to witness a surge in COVID-19 cases as 10,080 fresh infections were reported, taking the overall tally to 2,17,040. The latest government bulletin said the state now has 85,486 active cases after 1,29,615 coronavirus positive persons got cured, including 9,151 in the last 24 hours, and 1,939 deaths were reported in the state.

(The above story first appeared on LatestLY on Aug 09, 2020 08:25 AM IST. For more news and updates on politics, world, sports, entertainment and lifestyle, log on to our website latestly.com).