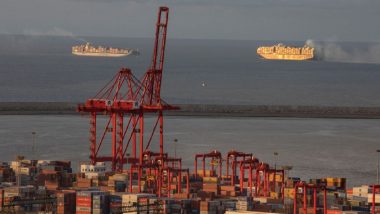 New Delhi, July 28: In a bid to curb imports, especially from China, and as part of its Atmanirbhar Bharat initiative, the Modi government will bring 371 categories of items such as toys, steel bars, steel tubes, consumer electronics, telecom items, heavy machinery, paper, rubber articles and glass under the mandatory Indian Standards (IS) regime. The process to bring these items under the Indian Standards (IS) regime has been expedited and is expected to complete by early next year. Indian Government Bans 47 More Chinese Mobile Apps.

"The commerce ministry has identified 371 imported tariff lines, including Chinese products. We are framing the mandatory standards for these items and to improve the enforcement including at government-owned major ports such as in Kandla, JNPT and Cochin by deploying our officers," Bureau of Indian Standards (BIS) director-general Pramod Kumar Tiwari was quoted by TOI as saying. The BIS has been approached to finalise mandatory standards for select imported items.

According to the BIS chief, the rules will be in place by December for most products and the rest by March 2021. The mandatory standards will put a curb on the import of sub-standard items. He added that the officials deployed at ports are working closely with customs officials and are carrying out tests on imported items on the spot. Tiwari also said the process for “One Nation One Standard” has also started.

Amid growing anti-China sentiments in the country, following the killing of 20 Indian soldiers during a face-off with Chinese in Galwan valley in June, Prime Minister Narendra Modi is pitching for the use of indigenous products. In his address to the nation in March, PM Modi had said that every Indian has to become "vocal for their local", not only to buy local products, but also to promote them proudly.

PM Modi has been urging citizens to work to make India Atmanirbhar or self-reliant. The Modi government has taken a slew of decisions to curb dependency on imported products and boost local production.

(The above story first appeared on LatestLY on Jul 28, 2020 08:32 AM IST. For more news and updates on politics, world, sports, entertainment and lifestyle, log on to our website latestly.com).