A lot of restorative work was already done in the park due to the reintroduction of Asiatic lions here, which would add to the restoration of the cheetah population. The project has been allocated Rs 1,400 lakh in the current fiscal year by the National Tiger Conservation Authority (NTCA). 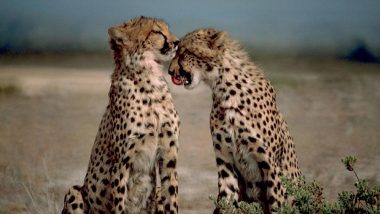 Cheetah, the fastest animal on land, will be reintroduced in India nearly 70 years after being declared extinct in 1952. It is believed that the last species of Asiatic cheetah found in India was hunted down by Maharaja Ramanuj Pratap Singh Deo in Koriya, Chattisgarh in 1947.

According to State Forest Minister, Vijay Shah, African Cheetah from South Africa is expected to be reintroduced in Madhya Pradesh-based Kuno National Park in November 2021. The Wildlife Institute of India (WII) had laid plans for the reintroduction which has also received the nod of the Supreme Court.

‘Project Cheetah’ aims at the reintroduction and re-establishment of the population of cheetahs in the country. It involves the identification and restoration of habitat where cheetahs once existed. The purpose of reintroduction of cheetahs, the large carnivores, is to conserve the threatened species and restore ecosystem functions. Cheetahs Sleep With Priest Every Night at Rajasthan's Pipleshwar Mahadev Temple? Here’s the Truth Behind the Old Video Going Viral With False Claim on the Internet.

The initial steps to restore the cheetah population started with a meeting of global experts at Gajner in September 2009. According to their study, Kuno Palpur Wildlife Sanctuary was rated high on the priority list for the reintroduction of the cheetah.

The Kuno Palpur Wildlife Sanctuary is part of the Sheopur-Shivpuri forested landscape. The sanctuary was upgraded into a national park in 2018, and lies within the larger Kuno Wildlife Division which has a total area of 1235 sq. km. The capacity of the protected area was estimated to sustain 27 cheetahs, which could be expanded to over 32 by the introduction of more forest areas to the Kuno Sanctuary.

A lot of restorative work was already done in the park due to the reintroduction of Asiatic lions here, which would add to the restoration of the cheetah population. The project has been allocated Rs 1,400 lakh in the current fiscal year by the National Tiger Conservation Authority (NTCA).

According to Shah, the process of creating a natural habitat for cheetahs has been started. Cheetah needs a habitat that is natural and has the availability of prey, water source, and open space.

Among the other cat populations found in the Kuno National Park, leopards can pose a competition to cheetahs in the food chain. However, according to Verma, even though there will be competition between the two species, it will be an indirect one.

Leopards live in dense bush and wooded koppies while cheetahs live in open savanna. There is a difference in their hunting habits as well. Leopards ambush or stalk their prey, lurk on the trees, pouncing when the prey is close enough. On the other hand, cheetahs stalk prey, and sprint after their prey in grassland.

Cheetahs feed on antelopes, deer rabbits, wild boars, and other small to medium size ungulates, while leopards feed on baboons, sambar, and other large animals.

Speaking about tiger and lion, the only tiger the park had, returned to Ranthambore, Rajasthan in November 2020. Meanwhile, the park has no lions. Potential difficulty of introducing African species into Indian habitat

The Asiatic cheetah, which was found in India is said to be similar to the African species. According to studies, both the species belong to different subspecies but have the same main species of genetics. The study conducted by Stephen J. O'Brien from the Laboratory of Genomic Diversity of National Cancer Institute, United States suggests that the Asiatic cheetah is genetically identical to the African cheetah which separated only 5,000 years ago.

The sanctuary was also chosen for the lion reintroduction project in 2013, despite strong objections from Gujarat. Gujarat had claimed that lions were part of its heritage and Madhya Pradesh had a poor record in wildlife management.

India, in the past, has managed well to prevent the population of tigers from going extinct. Under the ‘Project Tiger’, India expanded from nine tiger reserves in 1973 to 39 tiger reserves in 2010. Moreover, India’s tiger population now stands at 2,967 which is 70 % of the global tiger population. The Guinness World Records also recognised India’s efforts as the world's largest camera trap survey of wildlife.

According to Verma, as of now, only 8 cheetahs will be introduced to the Kuno National Park, which included both males and females. The move is to help in the expansion of the population of cheetah. If the plan works well, more cheetahs might also be introduced in the rest of the country.

(The above story first appeared on LatestLY on May 27, 2021 06:21 PM IST. For more news and updates on politics, world, sports, entertainment and lifestyle, log on to our website latestly.com).