Chinese Manja Gets Entangled Around Entrepreneur's Neck in Bengaluru, Leaves Him With 15 Stitches

A scooter-borne entrepreneur in Bengaluru received 15 stitches after Chinese manja or thread hanging across the road encircled around his neck. 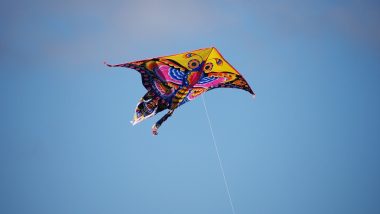 Bengaluru, June 25: A scooter-borne entrepreneur in Bengaluru received 15 stitches after Chinese manja or thread hanging across the road encircled around his neck. The incident took place near Adugodi police station around 1:30 pm on June 23. The entrepreneur, identified as Mallikarjuna KH, suffered a deep gash around his neck and his fingers also got cut by the Chinese manja. Chinese Manja Slits Throat of Delhi Biker.

Mallikarjuna, a resident of Wilson Garden, was going somewhere on scooter when he rode into the manja thread that encircled his neck. He tugged at it with his left hand to save himself and was left with cuts in his fingers. He said he and his child could have been killed had he not riding the scooter slowly, adding that the ban on the kite thread should be enforced strictly. Bengaluru Boy Injected Poisonous Substance at Birthday Party, Loses Forearm.

"It was really scary. Due to COVID-19 fears, there was not much traffic. The thread could have harmed more than two or three persons if there was usual traffic," Mallikarjuna told TOI. After the incident, Deputy Conservator of Forest HS Ranganatha Swamy instructed forest staff to lodge cases against shops selling the manja.

Bengaluru's civic body commissioner Gaurav Gupta also said he will instruct officials to take stern action against those selling Chinese manja, which causes deaths of hundreds of birds every year. According to senior officer in the BBMP forest cell, they get at least 40 distress calls every day to rescue birds caught in kite threads and 80% are Chinese manja.

(The above story first appeared on LatestLY on Jun 25, 2021 01:13 PM IST. For more news and updates on politics, world, sports, entertainment and lifestyle, log on to our website latestly.com).