Rahul Gandhi along with several other senior leaders of the Congress were detained by the police while protesting against the Central government on price rise and unemployment in the national capital on Friday. 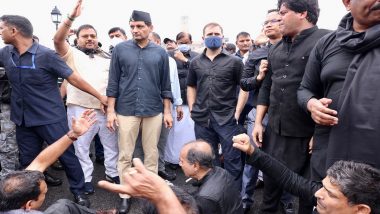 New Delhi, August 5: Rahul Gandhi along with several other senior leaders of the Congress were detained by the police while protesting against the Central government on price rise and unemployment in the national capital on Friday. The agitating Congress MPs were stopped at the Vijay Chowk while moving towards the Rashtrapati Bhawan from the Parliament House.

Congress had announced a nationwide protest on Friday against the policies of the Central government and inflation. Wearing black clothes, the MPs, under the leadership of Rahul Gandhi, tried to take out a march from the Parliament House to the Rashtrapati Bhawan. "All Congress MPs were marching towards Rashtrapati Bhawan to raise the issue of inflation and price rise but they are not allowing us to go ahead," said Rahul Gandhi. Congress Protest: Rahul Gandhi Detained by Police During Stir Against Price Rise, Unemployment in Delhi (Watch Video).

Earlier in the morning, Rahul Gandhi said that India "is witnessing the 'death of democracy' and anybody who stands against the onset of dictatorship is 'viciously attacked". Rahul Gandhi alleged that this is an era of dictatorship and whatever built in 70 years have been destroyed in the past eight years. "All the institutions, judiciary, media are being controlled by the RSS, and all the financial infrastructure is being controlled by them," Gandhi has alleged.

"I will do my work and I will be attacked more. The one who threatens, is the one who is scared. They are scared of the condition of the country. The promises that they have not been able to meet. They are liars. They lie 24 hours a day," Gandhi said during a press briefing in the morning.

(The above story first appeared on LatestLY on Aug 05, 2022 02:37 PM IST. For more news and updates on politics, world, sports, entertainment and lifestyle, log on to our website latestly.com).