The Congress on Monday decided to constitute an Empowered Action Group to prepare for the 2024 Lok Sabha polls. The development follows a report submitted by an eight-member committee on April 21. 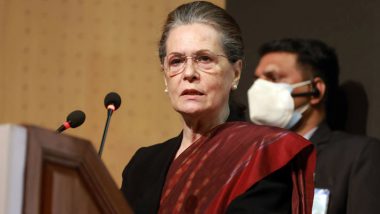 New Delhi, April 25: The Congress on Monday decided to constitute an Empowered Action Group to prepare for the 2024 Lok Sabha polls. The development follows a report submitted by an eight-member committee on April 21. According to sources, the group will be a window for political strategist Prashant Kishor, known as PK in political circles, to work for the party till 2024 elections but there is no official word on it.

Party General Secretary Randeep Singh Surjewala said that he did not want to comment on the members till the Congress President has constituted the committee. "But as I have said that the Empowered Action Group is for general elections 2024 and the group will strategise and calibrate its strategy for the elections," he added.

Surjewala said that he will refrain from commenting on the members of the committee as it is yet to be formed, while its learnt that the action group will have a primary task to work for the elections.

On Monday, Sonia held consultation with senior leaders on the role of political strategist Prashant Kishor in the party. The group, which was constituted to discuss the issue, submitted its report last week.

The Congress wants Kishor to finish his previous commitments made to other parties and work solely as a Congressman and not as a consultant. The final decision may be taken after talks with Rahul Gandhi.

As the state units are pitched against regional parties in West Bengal, Telangana and Andhra Pradesh, it does not want Kishor to have any truck with the regional parties.

The party leaders, who have submitted their report on the issue, admitted that there is no harm in the political strategist joining the party but there should be no conflict wherever the party is pitched against regional forces. Meanwhile, Telangana Rashtra Samithi (TRS) on Sunday signed a deal with Indian Political Action Committee (I-PAC) founded by the election strategist Kishor.

(The above story first appeared on LatestLY on Apr 25, 2022 04:36 PM IST. For more news and updates on politics, world, sports, entertainment and lifestyle, log on to our website latestly.com).