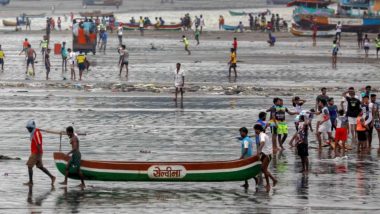 Fishermen carrying their boat on shoulders ahead of Cyclone Nisarga. (Photo Credit: PTI)

Mumbai, June 3: With just an hour left for the Cyclone Nisarga to hit the Maharashtra Coast, Brihanmumbai Municipal Corporation on Wednesday said that the civic body has arranged about 35 schools as temporary shelters for citizens, who have been appealed to relocate there. Also, BMC said that they have arranged pumps at more than 300 potential water logging areas and kept Mumbai Fire Brigade on alert to respond immediately in case of emergencies.

Briefing about the preparedness to deal with Cyclone Nisarga, BMC said, "BMC has arranged about 35 schools as temporary shelters for citizens, who have been appealed to relocate there." It added, "Pumps have been arranged at more than 300 potential water logging areas. In addition, all 6 pumping stations have been provided with adequate manpower." Cyclone Nisarga Live Path Tracker Map: Check Movement, Forecast and Current Position of Severe Cyclonic Storm Which Will Make Landfall Near Alibaug Today.

Among other details, BMC said that they have deployed 96 squads to move trees that may be uprooted by the storm, including 4 dedicated to each of the 24 wards in the city. Also, towing system has been implemented for vehicles that may get stuck due to storms. The BMC even ordered to provide generators for electricity at hypersensitive places as well as hospitals.

Apart from all these, BMC said that 8 units of NDRF and 5 units of Indian Navy have been deployed at various locations in the city. NDRF has 1 team each in Colaba (Ward A), Worli (G/South), Bandra (H/East), Malad (P/South) & Borivali (R/North) & 3 teams in Andheri (K/West).

Earlier, IMD Director Mrutyunjay Mohapatra said that four districts of the state would be severely affected, including Mumbai Metropolitan Region, Thane, Raigad and Palghar. He also said that Nisarga will make landfall in Maharashtra between 1 to 4 pm and wind velocity will be around 110 kmph in Mumbai at the time of landfall.

(The above story first appeared on LatestLY on Jun 03, 2020 12:29 PM IST. For more news and updates on politics, world, sports, entertainment and lifestyle, log on to our website latestly.com).