The death toll in Delhi violence rose to 38 after 11 more people lost their lives on Thursday. According to reports, 34 deaths were reported at GTB Hospital, three at LNJP Hospital and one at Jag Parvesh Chander Hospital. 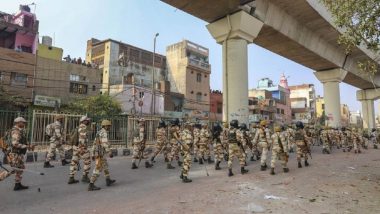 New Delhi, February 27:  The death toll in Delhi violence rose to 38 after 11 more people lost their lives on Thursday. According to reports, 34 deaths were reported at GTB Hospital, three at LNJP Hospital and one at Jag Parvesh Chander Hospital. Delhi police said that the situation was under control. The cases will be probed by two Special Investigation Teams (SITs). Till now, 48 FIRs have been registered in the violence that broke out in North East district of the national capital territory after pro and anti-CAA groups clashed on Sunday. Over 200 people were also injured in the fatal clashes. Delhi Violence: AAP Councillor Tahir Hussain Denies Involvement in Killing of IB Staffer Ankit Sharma.

As per the Delhi police, 350 Aman committee meetings have been held so far. MS Randhawa, Delhi Police PRO said that all cases related to the violence would be addressed separately. He claimed that the police had multiple CCTV footages. Meanwhile, the investigation has been transferred to the crime branch. Delhi Violence: 'Situation Returning to Normal in North East District,' Says Special Commissioner SN Shrivastava.

Earlier in the day, Delhi Chief Minister Arvind Kejriwal announced Rs 10 lakh each as compensation to the families of those killed in the violence. He also asserted that any member of the Aam Aadmi Party (AAP) member found guilty of involvement should get double the punishment prescribed in law. When asked about charges of involvement in violence and arson in northeast Delhi against AAP councillor Tahir Hussain, the Delhi CM said, “Any person found guilty should be given strict punishment. If any Aam Aadmi Party member is found guilty, he or she should be given double the punishment.”

Meanwhile, Bharatiya Janata Party (BJP) leader Kapil Mishra, accused of instigating the violence termed all the allegations against him as baseless. Speaking to reporters, Mishra said questions must be raised against those pitching to "divide India" rather than condemning him. He claimed that he did not attempt to instigate violence through the pro-CAA rally on February 23. The BJP leader added that he only wanted to get the arterial road in Jaffrabad cleared of anti-CAA demonstrators. Notably, violence spiralled in North East Delhi after pro and CAA groups clashed in Jaffrabad on Sunday.

(The above story first appeared on LatestLY on Feb 27, 2020 09:26 PM IST. For more news and updates on politics, world, sports, entertainment and lifestyle, log on to our website latestly.com).