In its strongly-worded statement over GC Murmu's remarks on polls in Jammu and Kashmir, the ECI stated that it was improper and amounted to interfering with the poll panel's mandate. 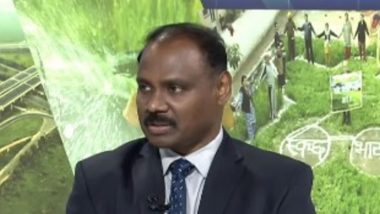 New Delhi, July 28: The Election Commission of India (ECI) on Tuesday sharply reacted to Jammu and Kashmir Lieutenant-Governor Girish Chandra Murmu's reported statement that elections in the union territory can be held after the ongoing delimitation exercise. In its strongly-worded statement over GC Murmu's remarks on polls in Jammu and Kashmir, the ECI stated that it was improper and amounted to interfering with the poll panel's mandate. EC Decides Not to Extend Postal Ballot Facility For Voters Above 65 Years in Bihar Assembly Elections And By-Polls.

This is seen as a rare incident when the ECI issued a statement against another constitutional functionary. Murmu has been giving statements to various media houses on the timing of elections in Jammu and Kashmir. In his recent interaction with The Tribune, the Lieutenant-Governor said that polls would be conducted in Jammu and Kashmir after the delimitation exercise which is currently being carried out. Election Commission Defers Bypolls for Assembly and Parliamentary Constituencies Until Further Orders, Schedule to be Announced at 'Appropriate Time'.

The ECI said many factors are taken into account before holding polls, including "topography, weather, sensitivities arising out of regional and local festivities". The coronavirus outbreak, the poll panel said, is another factor which needs to be considered while conducting elections. On polls in Jammu and Kashmir, it said: "Delimitation is also germane to the decision. Similarly, availability of central forces and railway coaches, etc. for the transportation of CPFs are important factors."

Assembly elections in Jammu and Kashmir have not been held in last two years since the Mehbooba Mufti-led PDP-BJP coalition government collapsed. The ECI has been postponing polls citing security concerns.

(The above story first appeared on LatestLY on Jul 28, 2020 03:58 PM IST. For more news and updates on politics, world, sports, entertainment and lifestyle, log on to our website latestly.com).