Gujarat Assembly Elections 2022: PM Narendra Modi Says ‘If Congress Wants To Be Part of State, It Has To Give Up Caste Politics’ 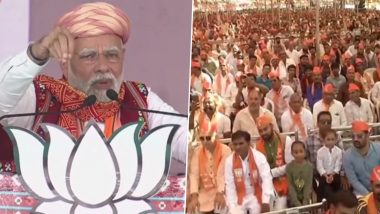 Bhavnagar, November 28: Prime Minister Narendra Modi while addressing a public meeting here on Monday attacked the Congress, and said that "people have thrown the Congress out of power because of its caste politics, and if it wants to be part of the state, it has to give up this caste politics and change its style."

Modi was addressing the public meeting in Palitana of the Bhavnagar district. He said, "During the Congress rule people were feeling unsafe, bomb blasts were very common. Every other day there used to be a blast. Since the BJP came to power, the shutters of these shops have been pulled down. Now in BJP rule people feel safe and secure, this is the gift of BJP." Gujarat Assembly Elections 2022: BJP Has Never Won These Seats Despite Its Dominance For Past 27 Years.

He appealed to the people to participate in voting at each and every polling booth, and said, "You have to ensure that Lotus keeps flourishing in the state... you have to work hard on each and every seat for the thumping majority of the BJP. In the next 25 years we have to make this the best state in the world, for which I need your support." Gujarat Assembly Elections 2022: Full List of BJP Candidates and Their Constituency Names.

Talking about the benefits extended to the farmers, he reminded that the central government was bearing Rs 1,600 to 1,700 subsidy per Urea bag. Whereas the farmer was paying only Rs 200 to 300 per bag.

(The above story first appeared on LatestLY on Nov 28, 2022 04:05 PM IST. For more news and updates on politics, world, sports, entertainment and lifestyle, log on to our website latestly.com).