The accused, identified as KP Gamit, the Deputy Director of Land Records Office, and Girish Patel, the head clerk were arrested on Wednesday for allegedly taking a bribe worth Rs 30,000. 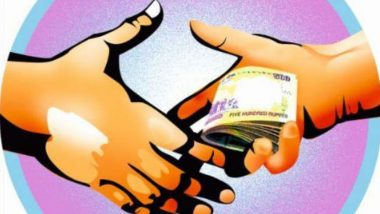 Gujarat, December 2: In yet another case of bribery, the Surat Anti-Corruption Bureau (ACB) arrested two government officials for allegedly accepting bribe from a person from the same department. The accused, identified as KP Gamit, the Deputy Director of Land Records Office, and Girish Patel, the head clerk were arrested on Wednesday for allegedly taking a bribe worth Rs 30,000.

Based on a complaint lodged by a clerk who was promoted as a head clerk in the department's office at Narmada, the raid was conducted by ACB, the Indian Express reported. Reportedly, The complainant needed an approved request letter from the head office in Surat for a salary scale hike. The complaint contacted Girish in the Surat office to get the letter. Girish Patel introduced the clerk to KP Gamit.  CBI Arrests Delhi Police SI, ASI for Allegedly Taking Bribe From Rape Accused Cop.

The complainant agreed to pay the bribe and alerted the ACB. ACB laid a trap to catch the accused red-handed and sent the complainant to the office of the accused head clerk with the bribe money. Upon receiving the signal, the ACB team barged into the office and arrested the head clerk, and recovered the money. Subsequently, KP Gamit was arrested. Conman Sukesh Chandrasekhar Bribed Jail Officials, Gifted Luxury Car to Actress Nora Fatehi, Suspects ED.

As per the reports, both the arrested officials have been sent for the COVID-19 test and further probe is underway.

(The above story first appeared on LatestLY on Dec 02, 2021 01:27 PM IST. For more news and updates on politics, world, sports, entertainment and lifestyle, log on to our website latestly.com).