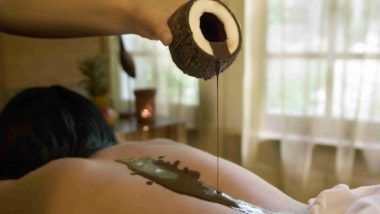 Gurugram, March 1: Thirteen spa centres operating in zone-4 of the Municipal Corporation of Gurugram (MCG) jurisdiction were sealed by a team led by the MCG Zonal Taxation Officer on Monday. They were allegedly found to be operating without a valid trade licence, said the MCG official. The centres were located at the Omex City Centre mall on Sohna Road.

The MCG Commissioner had ordered officials to take action against establishments who are operating without trade licences. As per the instructions by Joint Commissioner-4 of the MCG Pradeep Ahlawat, a team was formed under the supervision of Zonal Taxation Officer Devender Kumar to take action against these establishments. Woman Ends up Walking Naked on Streets Instead of Relaxing at Spa with Her Boyfriend! Here's What Happened.

"Thirteen spa centres were sealed on Monday by the MCG team. These centres were being run without obtaining a valid trade licence from the MCG. It is mandatory for all commercial outlets to obtain a necessary business licence under sections 331, 335 and 336 of the Haryana Municipal Corporation Act, 1994," said Ahlawat.

"We had received a complaint that these establishments are being operated illegally in the Omaxe City Centre Mall. Based on the complaint received, sealing action was taken on Monday," the official added. "All outlets would now have to get registered with the MCG and all holders of establishment licences would have to apply afresh for a new licence," he added.

(The above story first appeared on LatestLY on Mar 01, 2021 10:03 PM IST. For more news and updates on politics, world, sports, entertainment and lifestyle, log on to our website latestly.com).