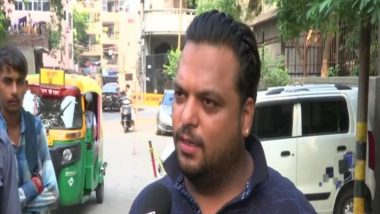 Gurugram, September 3: A resident of Delhi has been fined a whopping Rs 23,000 by the Gurugram traffic police for violating rules under the new Motor Vehicle Act which came into force from September 1. Dinesh Madan, a resident of Geeta Colony in East Delhi, was issued a challan on Monday for riding a motorcycle without wearing a helmet and also for not carrying important documents. New Motor Vehicle Act 2019 Comes Into Force; Rs 10,000 Fine For Refusing Way to Ambulance.

According to the challan copy, Madan was fined Rs 5,000 for riding scooty without his licence, Rs 5,000 for not producing his Registration Certificate, Rs 2,000 for not having third-party insurance, Rs 10,000 for violating air pollution standards and another Rs 1,000 for not wearing a helmet. Madan was issued the challan opposite the district court in Gurugram. New Motor Vehicle Act Comes Into Force From September 1: Here's List of Stringent Rules And Penalties For Violating Norms.

"As Madan was not wearing his helmet, he was stopped by the on-duty traffic personnel. He was unable to produce his documents, when asked. Hence, the challan was issued," a traffic police officer told news agency IANS. Madam, however, said that the fine was hefty.

"I wasn't wearing helmet and didn't have a Registration Certificate (RC). Traffic police asked me to give him my scooty's key but I denied. Immediately, he printed a challan of Rs 23,000 and seized my vehicle," Madan told ANI. "I even got a copy of RC on WhatsApp from home but by then he had printed. The amount could have been less if he had waited for a while," he said.

Madan said the scooty he was rising is worth Rs 15,000. "I want that fine should be relaxed. From now on, I will always carry my documents," he promised.

(The above story first appeared on LatestLY on Sep 03, 2019 06:13 PM IST. For more news and updates on politics, world, sports, entertainment and lifestyle, log on to our website latestly.com).