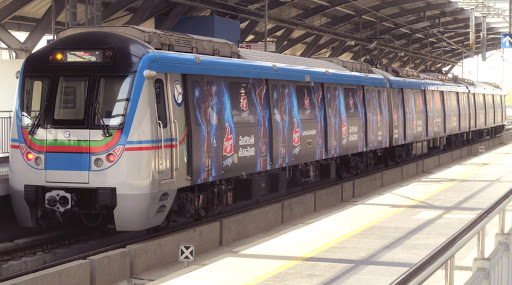 Hyderabad, December 10: Five days after allowing female commuters travelling by Hyderabad Metro Rail to carry pepper spray with them for their safety, the city's public transport system has announced that it is ready with an app-based or QR code-based ticketing system, which would help commuter travel in a hassle-free manner. HMRL managing director NVS Reddy informed the official announcement regarding the latest development will be introduced by the end of December and would be in addition to the existing metro card option.

Apart from the announcement of the latest development, Reddy stated that the public-private partnership of HRML would soon begin its operation on new 11-km stretch between Jubilee Bus Station (JBS) and Mahatma Gandhi Bus Station (MGBS). Though the date has not been fixed as of yet, teh authorities are expecting that the metro trains might ply on the new route by the end of January 2020. Hyderabad Metro Rail to Allow Women to Carry Pepper Spray For Self-Defence After Outrage Over Vet's Rape-Murder Case.

Rubbishing claims of HRML being a 'real-estate project', Reddy stated that when it was a government project, it sought 269 acres and under the PPP mode also, it has not changed. He said, as reported by Indian Express, "The concessionaire was allowed to take up construction on 18.5 million sq ft as per the agreement. Of this, 6 million sq ft works are being taken up and 1.3 million sq ft works are over. There are four metro malls as of today."