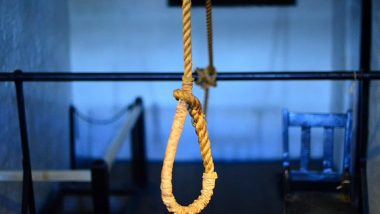 Mumbai, September 27: Harassment and torture by loan sharks is on the rise and a man from Hyderabad has become a latest victom of the same. In a shokcking incident, a 25-year-old man ended his life. According to reports, the deceased identified as Rajesj was found hanging at his house in Nizampet. Police officials said that a white board was found near the deceased with his last words written on it.

According to a report in the Times of India, the white board had a sentence that read, "an appeal to authorities to block all loan apps". Bachupally police said that the text on the board read: "...the government took action against porn and gaming but they should first act by blocking loan apps". Reports also calim that the deceased's appeal was addressed to PM Narendra Modi and Telangana CM K. Chandrashekar Rao, however, police officials did not confirm the same. Thane Shocker: Man Strangles Live-In Partner to Death After She Returns Home Drunk in Bhiwandi; Arrested While Trying to Transport Dead Body in Ambulance.

A Chandra Sekhar, assistant commissioner of police (Kukatpally division) said, "Rajesh’s wife had gone to her hometown in Vijayawada for Ganesh festival. Since then he has been alone. When she tried to reach Rajesh on Monday, he did not answer the phone. That’s when she asked the watchman to check on him. When the watchmen went to the flat, he found the doors ajar. He went inside and found Rajesh hanging." Maharashtra Shocker: Man Strangles Live-In Partner to Death in Bhiwandi, Arrested.

An officer said that Rajesh's family told them about the harassment the deceased faced by the loan recovery agents. The officer also said that the loan sharks sent rude messages and even shared his nude picture.

(The above story first appeared on LatestLY on Sep 27, 2022 04:07 PM IST. For more news and updates on politics, world, sports, entertainment and lifestyle, log on to our website latestly.com).