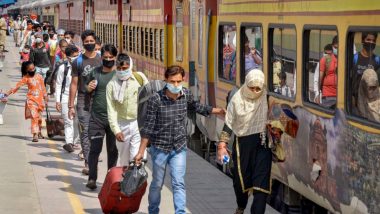 Mumbai, May 31: The Ministry of Railways and the Maharashtra government reached consensus on the running of special trains from tomorrow, June 1. Deliberations were held between the two sides late on Sunday, as inter-district movement was kept regulated in the state under fifth phase of lockdown. This had prompted Railway Board chief VK Yadav to seek the state government's nod for the pliance of special trains.

In his letter to Maharashtra Chief Secretary Ajoy Mehta, Yadav warned of chaos if the state government refrains from permitting the trains to ply. Several passengers have already booked the tickets when the special passenger train services was announced on May 20, and bookings were opened from May 21 onwards. Indian Railways to Run 200 Passenger Train Services from June 1, Over 1.45 Lakh Passengers Will Travel on Day 1 of Lockdown 5.

Yadav, through his letter to the Chief Secretary, appealed the state government to issue necessary instructions to district administration to organise the compliance to the guidelines of MHA & MOHFW for running of special trains from Monday.

"In the letter, he has mentioned that as large number of passengers have already booked to travel by these trains, it would cause severe inconvenience to the passengers and may also lead to law and order issues at various stations if these trains are cancelled," said a statement issued by the Western Railway.

"Therefore, it would be desirable to continue operations of the trains, which have already been announced on May 20 and booking has started on May 21," Yadav was further quoted as saying by the Western Railway statement.

Ministry of Railways & Maharashtra Government after discussions, have reached a consensus on the issue of running of special trains from/to Maharashtra as per the schedule with effect from 1st June, 2020: Western Railways https://t.co/PASERSV4tP

In the past week, the Railways and Maharashtra government were involved in another row after Chief Minister Uddhav Thackeray alleged lack of trains being sent to the state to ferry back migrant labourers. This had prompted a reply on social media from Railways Minister Piyush Goyal, who said that the Railways is prepared to send the maximum number of trains if the Thackeray government could furnish a list of migrants along with their destinations.

(The above story first appeared on LatestLY on May 31, 2020 11:56 PM IST. For more news and updates on politics, world, sports, entertainment and lifestyle, log on to our website latestly.com).