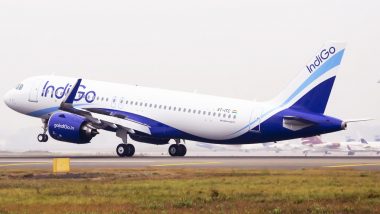 Mumbai, January 23: A Hyderabad-bound IndiGo flight, which took off from the Mumbai airport during the wee hours on Thursday, was forced to make an emergency landing back in Mumbai after its engine stalled mid-air. Reports inform that IndiGo flight 6E 5384 had to return to Mumbai’s Chhatrapati Shivaji Maharaj International (CSMI) airport after the pilot observed engine caution message during the flight. The pilot followed the laid-down standard operating procedures and landed the aircraft safely back at Mumbai airport.

According to a report by Hindustan Times, the Airbus 320neo aircraft was scheduled to depart from CSMI airport at 12.50 am on Thursday but took off at 1.03 am and later returned after it crossed Pune. The aircraft however landed safely at 1.41 am. Udaipur-Bengaluru IndiGO Flight 6E 979 Taken Off From Runway After Smoke Detected in Aircraft; All Passengers Safe.

The HT report quoted an IndiGo spokesperson saying that the IndiGo flight 6E-5384 (A320) operating from Mumbai to Hyderabad had an air turn back to Mumbai after the pilot observed engine caution message during the flight. “The aircraft returned to Mumbai and is under inspection at the Mumbai airport. All passengers were accommodated on another flight to Hyderabad”, the spokesperson said.

Reports inform that full emergency (fire tenders and ambulances are kept ready) was declared until the Neo aircraft could land safely at main runway 27. The report quotes a senior Mumbai airport official saying that the incident took place around 1.17 am after which the pilot declared PAN-PAN (international standard urgency signal) and requested the Mumbai Air Traffic Control (ATC) to return to Mumbai as its engine 1 had stalled.

(The above story first appeared on LatestLY on Jan 23, 2020 01:35 PM IST. For more news and updates on politics, world, sports, entertainment and lifestyle, log on to our website latestly.com).