Shiv Sena on Thursday ordered the owner of the reputed Karachi Sweets in Bandra to change its name to something more Indian or Marathi. However, hours later the Shiv Sena retracted. "It makes no sense to ask for changing their names now...It's not the Shiv Sena's official stance," says Sanjay Raut. 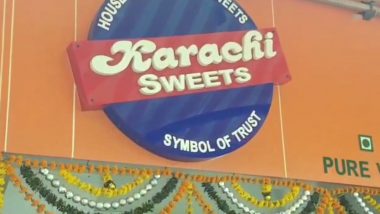 Mumbai, November 19: In a huge embarrassment for the ruling Maha Vikas Aghadi, an activist of the Shiv Sena on Thursday ordered the owner of the reputed Karachi Sweets in Bandra to change its name to something more Indian or Marathi. However, hours later the Shiv Sena washed its hands off the incident by making it clear that it was not the "official stand" of the party.

The Sena activist - Nitin Nandgaonkar, barged into the shop and confronted the owner with his demand, contending that the word 'Karachi' causes anguish to him as the Pakistani city is associated with terror. "We are not bothered if you are a Hindu or Muslim. The name Karachi is a problem, and you cannot use it here. It is a place of terrorism and there should be no business in the name of Karachi," Nandgaonkar sternly told the owners-managers. Sena Worker Asks 'Karachi Sweets' Owner to Change Shop's Name.

Even as the shop owners said that they had migrated to India after Partition, the Sena activist was in no mood to listen and said he would return "after 15 days to check out the name change." Nandgaonkar even offered to help the shop with the registered name-change formalities with the BrihanMumbai Municipal Corporation (BMC) and other departments if required, but said he would not tolerate the word 'Karachi'. Shiv Sena Leader Nitin Nandgaonkar Asks Bandra’s Karachi Sweets Owner to Change Shop Name, Video Goes Viral.

Incidentally, there are other shops and establishments bearing names like 'Karachi' and 'Lahore' in Mumbai, Pune and some other cities of Maharashtra, mainly as a reminder of the ancestors of the present-day owners. Reacting to the development, Shiv Sena MP and Chief Spokesperson Sanjay Raut said: "Karachi Sweets and Karachi Bakery have been in Mumbai since 60 years. They have nothing to do with Pakistan. It makes no sense to ask for changing their names now...It's not the Shiv Sena's official stance."

A former activist of Maharashtra Navnirman Sena (MNS), Nandgaonkar also posted a video and a warning on social media that "henceforth, 'Karachi' would not allowed in Mumbai or Maharashtra" as it is the den of terrorists. "Karachi Bakery, Karachi Sweets, Karachi School, etc. will not be tolerated. In 15 days, change the name," he said in his ultimatum, but after the party dissociated itself from his solo campaign, he suddenly went incommunicado.

The Aam Aadmi Party (AAP) slammed the Shiv Sena's 'goondagiri' by threatening the sweet-shop owner and urged Mumbai Police to take cognizance. "The Shiv Sena and Nandgaonkar must be well aware that 'Sindh' is part of our National Anthem as well. Is our beloved National Anthem the next target?" asked AAP Spokesperson Preeti Sharma-Menon.

She pointed out that Sindhis are indigenous Indian people who took refuge after the Partition, many made Mumbai their home, so "anything that offends the Sindhis..offends every Indian". Sharma-Menon demanded that Nandgaonkar must immediately apologise to the aged owners of the Karachi Sweets and the the Shiv Sena must stop resorting to such 'vigilantism' during the pandemic.

(The above story first appeared on LatestLY on Nov 19, 2020 09:06 PM IST. For more news and updates on politics, world, sports, entertainment and lifestyle, log on to our website latestly.com).