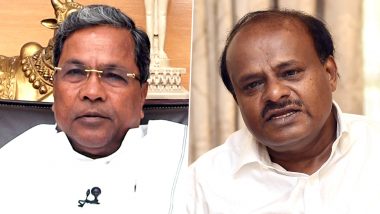 Bengaluru, May 27: Ahead of the scheduled inauguration of a city flyover by Chief Minister B.S. Yediyurappa on Thursday, Karnataka opposition leaders came out against naming it after Hindutva icon Veer Savarkar. On Wednesday, Congress leader Siddaramaiah and Janata Dal (S) leader H. D. Kumaraswamy expressed their opposition to the naming of a city flyover after Veer Savarkar.

The flyover is to be inaugurated on May 28, the birth anniversary of freedom fighter Vinayak Damodar Savarkar, projected as a Hindutva icon. The opposition feels that instead of Savarkar, who hailed from Maharashtra, the state government should have named the flyover after a freedom fighter belonging to Karnataka. Veer Savarkar Jayanti 2020 Messages: PM Narendra Modi, Vice President Venkaiah Naidu and Other Political Leaders Pay Tributes to the Indian Activist on His 137th Birth Anniversary.

"The urgent decision of renaming the Yelahanka upper bridge in the name of Savarkar is enough proof that the administration is not in the hands of the elected state government but in the hands of a puppeteer behind the stage," tweeted former Chief Minister Siddaramaiah.

He termed the government decision as anti-people and criticized the ruling BJP for seeking Opposition support. Another former Chief Minister, H. D. Kumaraswamy termed the decision a disgrace to Karnataka.

"The state government's decision to nominate Savarkar's name for the Yelahanka bridge is a disgrace to those who have struggled for the country's prosperity," tweeted Kumaraswamy.

"There are many great people who worked for the development of the country before and after independence. Their names could have been used to name the bridge," said Kumaraswamy. He questioned how state freedom fighters' names are used in other states.

"On behalf of the people of the country, I urge the state government to take a step back from this decision," said the JD (S) leader. Veer Savarkar Jayanti 2020: Interesting Facts About the Freedom Fighter to Share on His 137th Birth Anniversary.

(The above story first appeared on LatestLY on May 28, 2020 10:37 AM IST. For more news and updates on politics, world, sports, entertainment and lifestyle, log on to our website latestly.com).