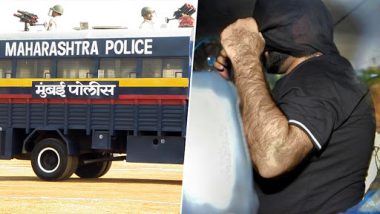 Mumbai, July 29: The Maharastra government on Monday slapped Maharashtra Control of Organised Crime Act (MCOCA) on Dawood Ibrahim's nephew Rizwan Kaskar. The ACP Crime Branch has been reportedly given the charge to investigate the extortion nexus which includes Chota Shakeel and Fahim Muchmuch, who were wanted in the case. Rizwan was arrested by Mumbai Police Anti-Extortion Cell (AEC) on Wednesday night from Mumbai's Chhatrapati Shivaji International Airport.

According to the police, around 100 cases of extortion and others are registered against Chota Shakeel for the past few years and over 40 cases are on Fahim Machmach. These two people are considered as wing leaders and as per the MCOCA, the ACP has the authority to move the MCOCA against the wing leaders, which has done in the Sessions Court. Dawood Ibrahim’s Nephew Rizwan Kaskar Arrested by Mumbai Police in Extortion Case

Earlier on Sunday, reports arrived that though wanted fugitive Dawood Ibrahim's assets are frozen across the world, he continues to invest money, earned through his organised crime syndicate, in the Pakistan Stock Exchange (PSX). The Indian agencies are gathering clinching evidence against Ibrahim's investment of illegal money into the PSX, earned through his crime syndicate, which primarily flourishes on drug smuggling, gun-running, Fake Indian Currency Notes (FICN) racket and extortion.

(The above story first appeared on LatestLY on Jul 29, 2019 03:55 PM IST. For more news and updates on politics, world, sports, entertainment and lifestyle, log on to our website latestly.com).