After visiting the landslide site, he will be meeting the injured persons from the state undergoing treatment at a local hospital, the minister added. He said bodies of eight people from the state – seven construction company staff and one army jawan – have been recovered so far. 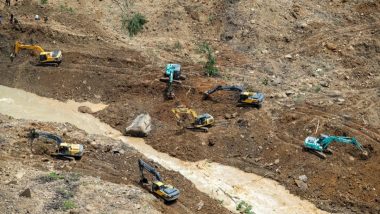 Guwahati/ Morigaon, July 2: At least eight people from Assam, including one army jawan, have been killed so far in the landslide at a railway construction site in Manipur's Noney district, state Cabinet Minister Pijush Hazarika said. Twelve others from the state, including a railway engineer, are still missing, he said. The overall death toll in the landslide at Tupul yard railway construction camp in the neighbouring state on Wednesday night has increased to 25, while 38 others are still missing.

“It is an extremely tragic and unfortunate incident. Search and rescue operations are going on in full swing,” Hazarika, who reached Tupul on Saturday morning, told PTI over phone.

After visiting the landslide site, he will be meeting the injured persons from the state undergoing treatment at a local hospital, the minister added. He said bodies of eight people from the state – seven construction company staff and one army jawan – have been recovered so far.

"One railway engineer and 11 other construction company workers are still missing. Five persons had been rescued, out of which two are currently hospitalised,” he said. Hazarika said the bodies of the deceased civilians will be airlifted to Assam and the state government will make all necessary arrangements. Manipur Landslide: Death Toll Rises to 10 as Rescue Operations Continue.

“We will also arrange for transportation of the injured workers back home,” he added. The body of the deceased army jawan, who hailed from Bajali district, was brought to his village by the security forces and last rites performed on Saturday. Hazarika, who was deputed to Tupul by Assam Chief Minister Himanta Biswa Sarma, also thanked the Manipur government for their search and rescue operations.

“On behalf of Govt. of Assam, I sincerely express my gratitude towards Manipur Govt. & HCM Shri @NBirenSingh ji for their relentless efforts in the rescue & relief operations of the victims despite complex topographic hurdles,” Hazarika wrote on Twitter. He also said the Central government is extending all possible logistical support to the state in the rescue operations.

“My prayers are with everyone affected by this calamity and I extend my sincere condolences to the bereaved families of the deceased,” the minister added. Meanwhile, Morigaon deputy commissioner PR Gharphalia said four bodies of persons from the district were recovered and identified on Friday, while another was identified the day before.

"So far, five persons from Morigaon have been confirmed to have been killed in the landslide. Several others who were also working at the same site from this district are still missing,” he said. Gharphalia said the administration was in touch with the families of the deceased, injured or missing and rendering all possible assistance.

The chief minister had on Friday shared a list of 22 names from Morigaon district who were engaged at the railway construction site. Out of these, five were rescued in injured condition, five confirmed dead and 12 others are still to be traced. Most of the people from the state engaged at the landslide site hailed from Morigaon and had gone to work as staff of the construction company about 20 days back.