MP Shocker: Stabbing Victim in Jabalpur Made to Stand in Police Station With Knife in Back Till Completion of Legal Formalities, Say Reports

Visuals circulated on social media, and published by media outlets, showed the victim - identified as Sonu - standing in a shirt that was soaked with blood on his backside. The knife was still present at the spot of his body where he was stabbed, reports said. 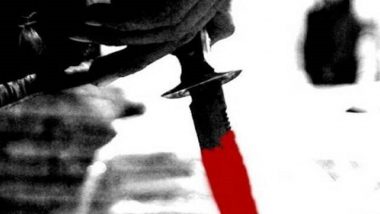 Bhopal, October 18: A stabbing victim in Madhya Pradesh's Jabalpur district was made to stand in the police station till completion of the legal formalities, reports said. The shocking incident was reported at Garha police station on Saturday, after the victim and his family members had arrived to lodge a complaint against the accused. Delhi Man Stabbed to Death by Juveniles for Objecting to Bike Stunts in Raghubir Nagar.

Visuals circulated on social media, and published by media outlets, showed the victim - identified as Sonu - standing in a shirt that was soaked with blood on his backside. The knife was present at the spot of his body where he was stabbed, reports said.

The police, instead of immediately rushing him to the nearest hospital at the earliest, first completed the legal formalities first, reported India Today. He was later reportedly taken to the hospital and his condition was not stated as serious.

The incident in question has come to light from Garha police station in #MadhyaPradesh's #Jabalpur where the youth was made to stand until formalities could be completed before he was finally rushed to a hospital.

Reports citing the allegations of victim's kin claim that Sonu was stabbed by the main accused Golu, and his accomplices in the intervening night of October 16-17 when the former had went out of his home for a walk.

The family members claimed that Golu attacked Sonu as both of them were involved in a heated argument on October 15. The latter was furious about Golu and his friends consuming alcohol near his residence. This had led to the eruption of argument between them.

(The above story first appeared on LatestLY on Oct 18, 2020 03:27 PM IST. For more news and updates on politics, world, sports, entertainment and lifestyle, log on to our website latestly.com).