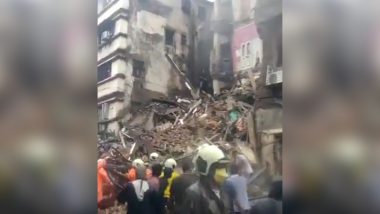 Mumbai, July 16: A portion of Bhanushali building collapsed in Mumbai on Thursday after incessant rains lashed the city. The tragic incident took place at the city’s Fort area. Several people are feared trapped. Senior officials have rushed to the spot and rescue operation is underway.

According to reports, four fire tender also reached the spot. Till now, there are no reports of any injuries or casualties in the incident.  Shiv Sena MP Arvind Sawant said, "I have heard that repair work was underway at the building. The families still in the building will be evacuated."

Earlier in the day, A ground-plus-three chawl collapsed in Malad  after incessant rains continued to lash Mumbai. According to a report published in Mumbai Mirror, the incident took place around 2:30 pm at Plot No. 8B, Gate No 5, at Abdul Hamid Marg in Malvani area.

Due to incessant moderate to heavy rainfall overnight, the city received 1,024 millimetres (mm) rainfall which is 122 percent of July’s monthly average. According to The Santacruz weather observatory, the Mumbai and its suburbs, recorded 191.2 mm of rain from Wednesday 8:30 am till Thursday morning.

(The above story first appeared on LatestLY on Jul 16, 2020 05:36 PM IST. For more news and updates on politics, world, sports, entertainment and lifestyle, log on to our website latestly.com).