A Mumbai woman was attacked and robbed inside a Mumbai Local on Wednesday morning. The 29-year-old woman was travelling from to her friend's home from Vasai. The incident took place between Vasai and Naigaon at around 7:30 am. 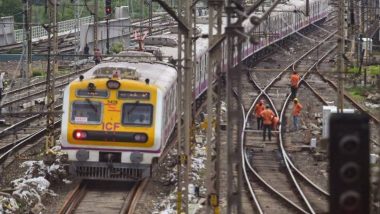 Mumbai, February 17: A Mumbai woman was attacked and robbed inside a Mumbai Local on Wednesday morning. The 29-year-old woman was travelling to her friend's home from Vasai. The incident took place between Vasai and Naigaon at around 7:30 am. After committing the crime, the accused got down at Vasai station.

According to a report published in India Today, the woman was immediately rushed to a nearby hospital in Naigaon. She also received stitches. The accused was caught in CCTV camera when he was leaving the platform. A grab of the footage was reportedly accessed by the police. Mumbra Woman Caught for Chain Snatching on Mumbai Local, Posed As Office-Goer on Train.

The woman boarded Andheri local from Vasai railway station platform number 1 on Wednesday morning. She was alone in the compartment. Taking advantage, the accused started to snatch her mobile phone. When she resisted, he hit her on her face and snatched her gold chain. However, the chain broke when he pulled it. Mumbai: Boy Jumps Off Running Local Train After Snatching Mobile In Mumbra, Watch Video.

"The accused then attacked the woman with an object and started hitting her on her face and head. As she started fighting back, the accused pulled the woman's gold chain which broke and by then the train reached next station at Naigaon," reported the media house quoting a police official as saying.

A case has been registered by Vasai Railway police. Police have launched an investigation into the case and have launched a manhunt operation to nab the culprit.

(The above story first appeared on LatestLY on Feb 17, 2021 04:02 PM IST. For more news and updates on politics, world, sports, entertainment and lifestyle, log on to our website latestly.com).