The Prime Minister alleged that he has drawn increasingly sharp flak from the Opposition for his resolve to eliminate the menace of terrorism. 'I want to remove terror, but they want to remove Modi,' he said. 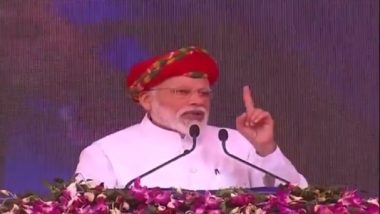 Jamnagar, March 4: Prime Minister Narendra Modi, who embarked on the first of his two-day visit to Gujarat on Monday, inaugurated a spree of projects in the city of Jamnagar -- the heart of the Patidar agitation which rocked the state in 2015-16. Modi also lambasted the Opposition, which has cornered the PM over his recent statement that the result of India-Pakistan dogfight would had been different if Rafale would had been inducted by now.

"They (Opposition) should use common sense. If the Indian Air Force would had Rafale today, all of their fighters would had gone down, and none of ours would had been struck. . I can't do anything if some people fail to understand this," Modi said, after inaugurating an annexe building of Guru Gobind Singh hospital. Mayawati Asks PM Narendra Modi to Explain Why No Rafale Jet Arrived During His Government.

The Prime Minister further alleged that he has drawn increasingly sharp flak from the Opposition for his resolve to eliminate the menace of terrorism. "I want to remove terror, but they want to remove Modi," he said.

"The nation agrees that the menace of terror has to be eliminated. I want to ask you, don't you trust what our armed forces say? We should be proud of our armed forces," the PM added.

Following his public rally, Modi also flagged off the Bandra-Jamnagar Humsafar Express. The train will connect western Gujarat to Mumbai, the capital of Maharashtra.

Before concluding his visit to Gujarat, Modi would also be launching the 'Pradhan Mantri Shramjivi Mandhan Yojana' at a function to be held in Vastral area of Gandhinagar district.

The Prime Minister is also scheduled tomorrow to flag off first phase of Ahmedabad Metro service. The spree of inaugurations comes days ahead of the Lok Sabha elections 2019 -- with the ruling BJP counting on successful electoral results from Gujarat, the home state of Modi, to return to power at the Centre. In the last general polls, the party had won all 26 parliamentary seats in the state.

(The above story first appeared on LatestLY on Mar 04, 2019 04:37 PM IST. For more news and updates on politics, world, sports, entertainment and lifestyle, log on to our website latestly.com).