"Over the last 8 to 9 months, the whole world has been battling the pandemic of the Coronavirus. Where is the United Nations in this joint fight against the pandemic? Where is its effective response?" Modi asked. Here are the highlights of PM Modi's virtual speech at the UN General assembly. 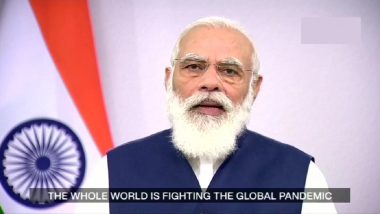 "Over the last 8 to 9 months, the whole world has been battling the pandemic of the Coronavirus. Where is the United Nations in this joint fight against the pandemic? Where is its effective response?" Modi asked. Here are the highlights of PM Modi's virtual speech at the UN General assembly.

The Prime Minister also called for reforms in the UN, claiming that the global body needs to adopt measures to further incorporate the views of countries like India. He also expressed the need for a rejig the manner in which the UN discharges its functions.

"Reform in the responses, in the processes, and in the very character of the UN is the need of the hour. It is a fact that the faith and respect that the UN enjoys among the 1.3 billion people in India is unparalleled," Modi said.

"As the largest vaccine producing country of the world, I want to give one more assurance to the global community today. India’s vaccine production and delivery capacity will be used to help all humanity in fighting this crisis," PM Modi said.

"Even during these very difficult times of the raging pandemic, the pharmaceutical industry of India has sent essential medicines to more than 150 countries," the PM further said.

"In the changed circumstances of the post-pandemic era, we are moving forward with the vision of 'Aatmanirbhar Bharat'. A self-reliant India will also be a force multiplier for the global economy," he added.

Safeguarding Rights of Women and Transgender

"Large scale efforts are being made in India to promote women entrepreneurship and leadership. Indian women, today, are biggest beneficiaries of world's largest micro-financing scheme. India is one of those countries where women are provided paid maternity leave of 26 weeks," Modi said.

"In India, the rights of transgenders are also being secured through necessary legal reforms," the PM underlined.

"India will not hesitate in raising its voice against the enemies of humanity, human race and human values – these include terrorism, smuggling of illegal weapons, drugs and money-laundering," Modi noted in his UNGA speech.

"Starting from January next year, India will also fulfil its responsibility as a non-permanent member of the Security Council. India will always speak in support of peace, security and prosperity," he added.

The speech lasted for 22 minutes. The Prime Minister did not overtly retaliate to the allegations of rights' violations levelled against his government by Pakistan PM Imran Khan - who had virtually addressed the UN General Assembly on Friday.

(The above story first appeared on LatestLY on Sep 26, 2020 06:48 PM IST. For more news and updates on politics, world, sports, entertainment and lifestyle, log on to our website latestly.com).