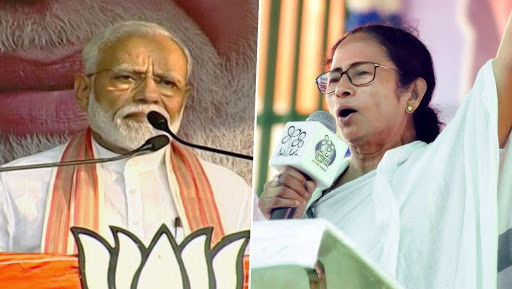 Kolkata, January 11: West Bengal Chief Minister Mamata Banerjee, who is at loggerheads with the centre over the Citizenship (Amendment) Act (CAA) and has targeted Prime Minister Narendra Modi over it, is likely to share the dais with him at an event here on Saturday. This would be her first meeting with the Prime Minister after protests erupted against the CAA. PM Narendra Modi to Arrive in Kolkata on Two-day Visit.

Prime Minister Modi during his two-day visit to Kolkata starting today will be inaugurating a light and sound show at the Millennium Park on Saturday evening. Senior officials of Kolkata Port Trust have confirmed that an invitation has been sent to Banerjee and she will share the stage with Prime Minister.

PM Modi has also hit out at Banerjee. In a rally at Ramlila ground in the national capital on December 22, he said that she had reversed her position on Bangladeshi refugees after coming to power in the state.

"Mamata Didi went straight to the UN from Kolkata. Till a few years back, the same Mamata Didi used to say that infiltrators from Bangladesh should be stopped and the refugees from there should be helped," the Prime Minister had said.

"Didi, what has happened to you? Why did you change? Why are you spreading rumours? Elections come and go. Why are you scared?" he had asked.As per the official programme, PM Modi will also unveil a plaque of 150 years of commemorative installation at the site of original Port Jetties and inaugurate the upgraded ship repair facility of Cochin Kolkata Ship Repair Unit at the Netaji Subhas Dry Dock.

The Citizenship (Amendment) Act, 2019, grants citizenship to Hindus, Sikhs, Jains, Parsis, Buddhists and Christians fleeing religious persecution from Pakistan, Afghanistan and Bangladesh who came to India on or before December 31, 2014.