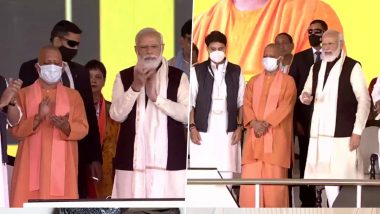 Speaking at the ceremony, PM Modi said that the airport will be the largest centre of repair, maintenance, & operation of aircraft. He addes, "A facility for maintenance, repair and overhaul of aircraft will be built in the area of 40 acres here, which will provide employment to hundred of youths."

The airport is introducing a swing aircraft stand concept, providing flexibility for airlines to operate an aircraft for both domestic and international flights from the same contact stand, without having to re-position the aircraft. This will ensure quick and efficient aircraft turnarounds at the airport while ensuring a smooth and seamless passenger transfer process.It will be India's first net-zero emissions airport.

(The above story first appeared on LatestLY on Nov 25, 2021 02:54 PM IST. For more news and updates on politics, world, sports, entertainment and lifestyle, log on to our website latestly.com).