A proposal to set up PM Wi-Fi Access Network Interface or PM-WANI in the country was passed on Wednesday in Union Cabinet's meeting. 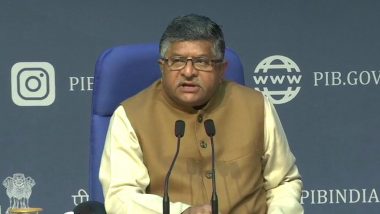 New Delhi, December 9: The central government will set up a public Wi-Fi system across the country to provide a wireless internet connection to citizens. A proposal to set up PM Wi-Fi Access Network Interface or PM-WANI in the country was passed on Wednesday in Union Cabinet's meeting, chaired by Prime Minister Narendra Modi. The government will also open public data centres in the country. Metro Rail Network From Noida City Centre to Sector-62 Gets Cabinet Nod, Uttar Pradesh Population to Largely Benefit.

"Cabinet has taken a decision to launch PM- Wi-Fi Access Network Interface-to unleash a massive Wi-Fi network in the country. Public data centres will be opened in the country. There will be no licence, fee or registration for it," Electronics and Information Technology Minister Ravi Shankar Prasad told a press conference after the Union Cabinet's meeting. '5G Holds Huge Promise for India; Collaboration, Identifying Suitable Use Cases Key'.

This Public Wi-Fi Access Network Interface will be known as PM-WANI. PM-WANI eco-system will be operated by different players as described herein under:

"COVID-19 pandemic has necessitated delivery of stable and high-speed Broadband Internet (data) services to an increasingly large number of subscribers in the country including areas which do not have 4G mobile coverage. This can be achieved by deployment of Public Wi-Fi," the government said.

"No license fee for providing broadband internet services using public Wi-Fi hotspots will massively encourage its proliferation and penetration across the length and breadth of the country," it added. The Union Cabinet also approved the provision of submarine optical fibre cable connectivity between the mainland (Kochi) and Lakshadweep Islands, and 4G connectivity in Arunachal Pradesh and some districts of Assam.

(The above story first appeared on LatestLY on Dec 09, 2020 03:55 PM IST. For more news and updates on politics, world, sports, entertainment and lifestyle, log on to our website latestly.com).