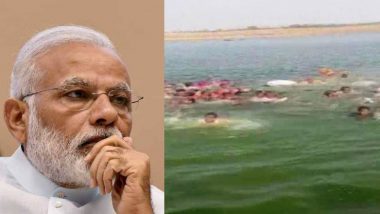 New Delhi, September 16: Prime Minister Narendra Modi on Wednesday expressed his grief over the boat capsize tragedy in Bundi district of Rajasthan, where at least 14 people died. The boat capsized in Chambal river, while it was carrying over 40 devotees to a temple in Indergarh area of the district.

Expressing his condolences, PM Modi said, "Anguished by the capsizing of a boat in Kota, Rajasthan. My thoughts are with those who have lost their near and dear ones." Rajasthan Boat Tragedy: Boat Capsizes in Chambal River in Kota District, At Least 10 Dead.

Anguished by the capsizing of a boat in Kota, Rajasthan. My thoughts are with those who have lost their near and dear ones: PM @narendramodi

Earlier in the day, People were travelling to Kamleshwar Dham near Gothda Kalaan in Bundi district in a boat. Eyewitnesses claim that the boat capsized due to strong current of the river. Following this, local rushed to rescue as many people as they can. The incident had taken place near the Dhibri Chambal area under the Khatoli police station limits of Kota.

(The above story first appeared on LatestLY on Sep 16, 2020 08:34 PM IST. For more news and updates on politics, world, sports, entertainment and lifestyle, log on to our website latestly.com).