A female worker of the Shiv Sena poured ink on a man who criticised Maharashtra Chief Minister Uddhav Thackeray on social media. 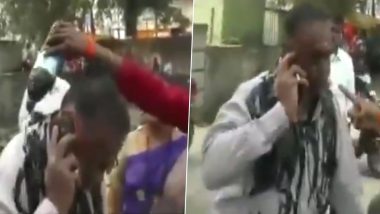 The incident comes over a week after the assault-cum-tonsuring of a VHP-BJP sympathiser by Shiv Sena workers. Hiramani Tiwari, a resident of Mumbai's Wadala area, was allegedly assaulted and tonsured by Shiv Sena workers on December 19 over an 'objectionable' social media post against Uddhav Thackeray. An FIR was registered in connection with the assault and five accused were arrested.

"I have learnt of an untoward, angry reaction to a nasty, low life troll, who has used uncivil language towards the CM's efforts to maintain religious harmony and remove fear from Maharashtra about CAA. Law and order is a subject of the police and shouldn't be taken into anyone's hands," Aditya had said in a nudge at the Shiv Sainiks who attacked Tiwari.

(The above story first appeared on LatestLY on Dec 31, 2019 08:24 AM IST. For more news and updates on politics, world, sports, entertainment and lifestyle, log on to our website latestly.com).