The Tamil Nadu Co-operative Milk Producers Federation (TNCMPF) has denied the possibility of such an incident claiming there was no way such a big foreign object could enter a sealed sachet. 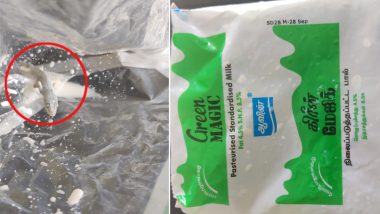 Chennai, September 29: A dead lizard in Aavin’s milk packet at Pallikaranai near Chennai has caused a shock. A few days ago, customers were shocked by the fact that there was a fly in a sachet of milk sold in Madurai. Though Aavin claims that efforts are underway to improve quality, more complaints continue of contamination of milk sachets.

According to a report in TOI, a consumer in Pallikaranai claimed on Twitter on Wednesday that he was shocked to see a dead lizard in one of Aavin's half-litre milk packets. Raghu Krishnan, who took up the issue with Aavin on Twitter, said that they immediately informed the shop from where the milk was supplied as they suspected the entire batch to be contaminated. Lizard Found in Chole Bhature! Half-Conscious Reptile Seen in Dish at Sagar Ratna Outlet in Chandigarh; Health Dept Collects Food Samples

Though the Tamil Nadu Co-operative Milk Producers Federation (TNCMPF) has denied the possibility of such an incident claiming there was no way such a big foreign object could enter a sealed sachet. The TNCMPF is the manufacturer of Aavin products.

The federation sent a quality team to the premises where the lizard issue was claimed and convinced the consumers that the lizard could have been in the vessel the milk was poured into after cutting open the sachet. Lizard in Midday Meal: 50 Students Fall Ill in Government School in Bihar's Bhagalpur

Commenting on the issue, S A Ponnusamy of Tamil Nadu Milk Dealers Employees Welfare Association said that such concerns raise a serious issue with the quality of Aavin’s milk and they suspect whether Aavin has installed efficient adulterant detecting machines or flycatchers in their production units. Nearly 3 million people use Aavin milk in Tamil Nadu everyday.

(The above story first appeared on LatestLY on Sep 29, 2022 09:11 AM IST. For more news and updates on politics, world, sports, entertainment and lifestyle, log on to our website latestly.com).