'Tharoorosaurus': Ready to Say Goodbye to Your Hippopotomonstrosesquipedaliophobia? Shashi Tharoor's Latest Book on Collection of 'Quirky' Words Set to Launch in September 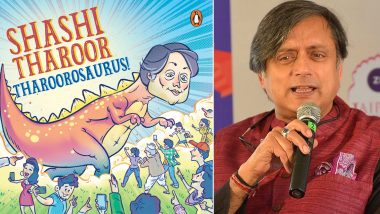 "Coming out in early September, some quirky words & the fun stories behind them!" Tharoor tweeted, retweeting Penguin India's tweet on Tharoorosaurus's launch. "Are you ready to say goodbye to your hippopotomonstrosesquipedaliophobia?" Penguin India tweeted, sharing the cover of Tharoor's latest book. The Congress leader is known for sharing new English words that are rarely used by speakers and writers. Do You Have Hippopotomonstrosesquipedaliophobia? Know Meaning and Pronunciation of Word in Shashi Tharoor’s Latest Tweet.

Coming out in early September, some quirky words & the fun stories behind them! https://t.co/QP7MQ6wjXa

Tharoor, who has written a number of books on politics, religion and other subjects, has got himself the tag of an online dictionary. He uses never-heard-before words that are complex in pronunciation and his dire followers are known to keep a tab of them. During interviews, when Tharoor is asked about his love of never-used words, he maintains that he doesn't do it on purpose and is quite natural.

(The above story first appeared on LatestLY on Aug 06, 2020 08:31 PM IST. For more news and updates on politics, world, sports, entertainment and lifestyle, log on to our website latestly.com).