Unemployment Rate in India Dipped to 11% in June From 23.5% in May, Says CMIE Data

The overall workforce participate in India stands at 37.3 crore in June, the CMIE data said, adding that those looking for employment opportunities was estimated as 46.1 crore out a population of nearly 1.3 billion. 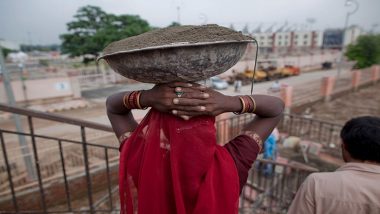 New Delhi, July 1: The unemployment rate in India dipped to 11 percent in June, as compared to 23 percent in May, said the data released by think-tank Centre for Monitoring Indian Economy (CMIE). The research body, using a sample size distributed in most parts of the nation and equally divided in rural and urban belts, said the job situation is returning to the pre-lockdown scenario. Lockdown Effect: 22% Workers Lost Jobs in 4 Northern States of India, Says Survey.

The lack of jobs continue to remain higher in urban India as compared to rural, CMIE said. In the latter, an unemployment of 10.52 was recorded, whereas, the urban joblessness rate stood at 12.02 percent.

The downswing of unemployment in rural regions is being linked to the increased government spending in MGNREGS. The beginning of kharif sowing season has also provided jobs to scores of landless farm labourers, the report suggested.

The overall workforce participate in India stands at 37.3 crore in June, the CMIE data said, adding that those looking for employment opportunities was estimated as 46.1 crore out a population of nearly 1.3 billion.

Among states, the maximum unemployment was recorded in Haryana - at 33.6 percent, followed by 21.3 percent in Tripura and 21 percent in Jharkhand.

The job scenario in India, according to experts, had begun turning grim in March ahead of the coronavirus outbreak in the nation. A prolonged economic slowdown had increased the rate of unemployment to 8.7 percent, as per the CMI data measured till first week of March.

The lockdown imposed to contain coronavirus transmission grounded the economy. The rate of unemployment had peaked to 27 percent in April, when a strict shutdown was imposed in most parts of the nation.

(The above story first appeared on LatestLY on Jul 01, 2020 06:45 PM IST. For more news and updates on politics, world, sports, entertainment and lifestyle, log on to our website latestly.com).