Much to the relief of residents of Delhi, Chief Minister Arvind Kejriwal on Wednesday announced that all the weekly markets in the national capital will now be reopened. The Delhi Chief Minister made the announcement on Twitter. 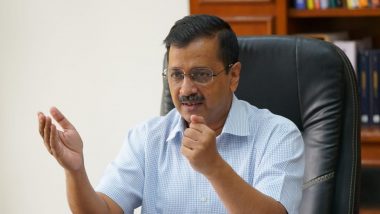 New Delhi, October 7: The Delhi government on Wednesday allowed all weekly markets to function in the national capital, Chief Minister Arvind Kejriwal announced on Wednesday. The AAP government in Delhi also allowed cinemas, theatres to reopen with 50 percent seating capacity from October 15. Taking to Twitter, the Delhi Chief Minister said till now, only two markets per day were allowed in each zone. However, as per the new announcement all the markets will be allowed to remain open for public. Kejriwal announced that cinema halls in Delhi will also be opened from October 15. He urged people to follow all the guidelines issued by the central government. Unlock 5: Health Ministry Issues SOPs For Festival Celebrations Amid COVID-19, Festive Events Permitted Only Outside Containment Zones.

Earlier this week, the Delhi government had urged Lieutenant Governor Anil Baijal to allow all weekly markets to resume operations in the city. After the proposal was sent to the LG, he allowed two weekly markets per zone per day. After the Centre announced fresh relaxations from October 15, the Delhi government had said a decision on permitting all such activities will be taken in a graded manner.

The Delhi Disaster Management Authority (DDMA) had ordered that status quo should be maintained in all activities permitted in Delhi, even as it allowed two weekly markets to be held per day per zone instead of one. The Centre, while issuing the Unlock 5 guidelines, had announced a slew of relaxations  from reopening Cinema halls and schools to raising the ceiling of people for social gatherings to 200. The Centre asked the state governments to decide whether they want to implement it or not depending on the prevailing Covid-19 situation.

(The above story first appeared on LatestLY on Oct 07, 2020 07:46 PM IST. For more news and updates on politics, world, sports, entertainment and lifestyle, log on to our website latestly.com).