Union Minister Amit Shah also extended his wishes and said that the duo of PM Modi and Uttar Pradesh Chief Minister Yogi Adityanath is working continuously for the overall development of the state. 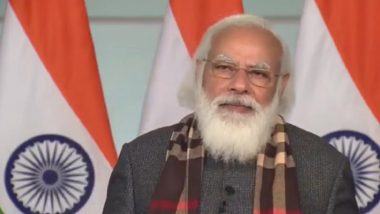 The Prime Minister's while greeting the people on the occasion of Uttar Pradesh Statehood Day tweeted, "Heartiest greetings to all the people of the state on the foundation day of Uttar Pradesh. This state is a sacred land of sacrifice, tenacity, tradition and culture, is playing an important role in building an Atmanirbhar Bharat of today. I wish this state continues to touch new heights leading to all-round development" (roughly translated from Hindi).

In a tweet, Adityanath said, "Many congratulations to the 24 crore citizens of the state on 'Uttar Pradesh Day'. Come, let us all commence this new journey of the development of 'New Uttar Pradesh'. Jai Bharat-Jai Uttar Pradesh!"

In December 2017, the Yogi Adityanath government had decided to organise Uttar Pradesh Day on January 24 for the first time since the state came into being in 1950.